Workers take part in Global Week of Action against adidas!

This week workers globally are demanding adidas negotiate with unions in actions taking place in over 20 cities, including Berlin, Los Angeles, Milan, and Dhaka. Workers in their supply chain are still owed millions in unpaid wages and severange since the pandemic. 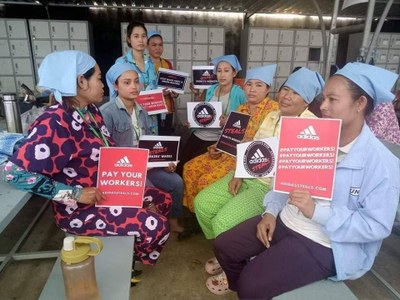 The Pay Your Workers campaign, endorsed by 260 civil society organisations around the world, including dozens of unions representing garment workers, will take to the streets in a global week of action, 24th to 30th October 2022, to call on adidas to respect workers’ rights in its supply chain. In actions in front of retail stores and factories, workers, unionists, and other activists will draw attention to the massive wage theft that occurred during the pandemic, as brands sought to exploit the global health crisis to increase profits. Workers’ and unionists’ voices will be heard directly from countries such as Indonesia and India that are rife with underpayment. In Europe and North America, activists will bring these workers’ voices to the shopping streets. Online and offline, adidas will be confronted with the demands of workers it has thus far ignored. 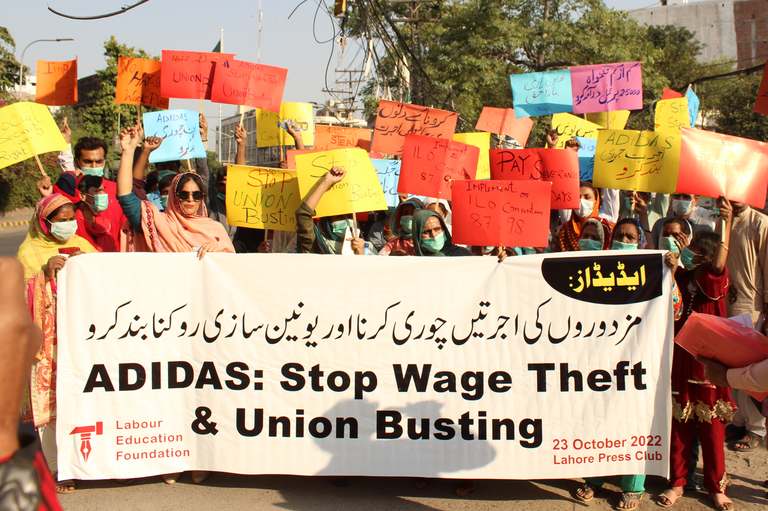 A new campaign website notes that, as one of the largest sports apparel companies in the world, adidas has a great opportunity – and obligation – to take action to meet its commitments to garment and footwear workers by joining negotiations with union representatives and sign a legally binding agreement to ensure remediation for wage theft and respect for workers’ rights.

Most of adidas’ production takes place in countries where there are inadequate social protection systems, if any, and these are usually very weakly enforced, meaning workers often do not have any source of income if they lose their jobs. Workers in Indonesia, Cambodia, and other key adidas production countries have been facing hunger and are accumulating debt to afford rent and food for their families.

Despite the fact that in 2021 adidas booked a net profit of over 2.3 billion dollars, the brand refuses to take responsibility for wage theft in its supply chain. In Cambodia alone, over 30,000 workers in 8 factories that produce adidas apparel are owed 11.7 million dollars. adidas would only need to pay 10 cents more per product to ensure their supply chain is free from wage theft. Given that the brand is willing to pay upwards of $800 million sponsoring Fifa, it seems unlikely they can't afford it.