Today, Clean Clothes Campaign supports IndustriALL Global Union’s call for a global day of action against union busting in the garment industry. The Covid-19 pandemic has given garment factories around the world an excuse to dismiss workers en masse and many decide to use this opportunity selectively to remove union leaders and members from their factories. 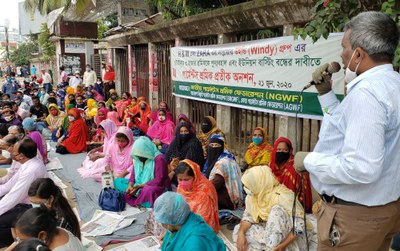 Protest outside the Windy Group office in Dhaka in June 2020

We are very concerned about the practice highlighted on this day of action, which affects thousands of union members all over the world. Those concerns extend to the four factories highlighted by IndustriAll – Isabella Pvt Limited in Sri Lanka, Euro Clothing II of the Gokaldas group in India, Premium Apparel in Haiti and the Greenfield factory in Cambodia – where union members were dismissed under the guise of downsizing in response to the pandemic. Unfortunately, the list can go on and on. We are also working on several cases of discriminatory dismissal in the Windy group in Bangladesh where thousands of workers were laid off, the Amber Stone factory in Myanmar where union leaders have been reinstated but now face charges, and the QMI factory in Cambodia which fired 19 union members. Other severe cases of union busting have been resolved in the past month, through reinstatement of union activists with backpay – won by the power of the worker organising that the union busting action was meant to break and with the support of international solidarity. Examples of this are Myan Mode, Huabo Times and Rui Ning in Myanmar. In a video released today, Clean Clothes Campaign shows how widespread the issue of union busting has become during the pandemic and how it brings insecurity and dire poverty to activists willing to speak up for the safety and livelihood of their co-workers in these difficult times.

Although the decision to use the Covid-19 crisis to bust a union is taken at the level of the factory, responsibility does not stop there. Garment brands and retailers have immense influence over their supply chains and are accountable for how workers are treated in the factories they source from. It is therefore up to the brands and retailers sourcing from these factories, which include H&M (Gokaldas, Windy), Primark (Windy, Amber Stone), Hugo Boss (Isabella), Hanesbrands (Isabella) Puma (QMI), Adidas (QMI), Ralph Lauren Corporation (QMI), Jack Wolfskin (QMI), Dunnes Stores (Greenfield). In supporting workers to solve cases of union busting in the past months Clean Clothes Campaign has reached out to brands and retailers, urging them to take responsibility for the union busting in their supply chains and we have seen examples of brands playing an important role in ensuring union activists are reinstated.

On this Global Day of Action, Clean Clothes Campaign calls on H&M, Primark and all garment brands and retailers in whose supply chains union busting is taking place to proactively trace and resolve the practice and to request that all suppliers develop a non- discrimination policy and apply that to retrenchment and re-hiring decisions, negotiated with and signed off by the factory-level union.