In a significant step for the Myanmar labour movement, workers at the Rui-Ning factory, producing for Inditex (Zara), Mango, Bestseller and Swiss brand Tally Weijl, are celebrating the signing of an agreement between the union, factory management and Inditex, regarding worker reinstatement and re-hiring following union busting. 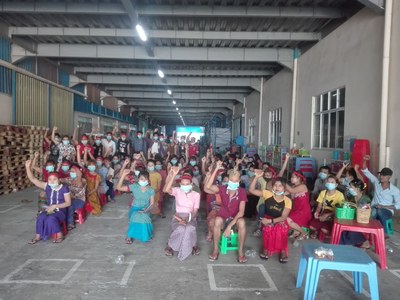 The Rui-Ning case has been ongoing since the start of April, and the agreement refers to the reinstatement of the union president with previous contract provisions and seniority, and backpay for wages and benefits. In addition, the agreement stipulates the re-hiring of other dismissed union members once the factory resumes hiring.

This agreement follows a three and a half months struggle which began when 324 workers were dismissed in the first week of April, 298 of them were union members, including the union president. Previous to the dismissals, the union had requested to be involved in consultations regarding pandemic layoffs, yet the management had refused to engage with them. The Rui-Ning company claimed that the layoffs affected those who had worked there for less than one year, however 30 non-union members who had been employed for under one year were not dismissed.

The Rui-Ning union, affiliated to the Federation of Garment Workers Myanmar and supported by Solidarity Center and the Clean Clothes Campaign (CCC), took up a central role in international campaigning and negotiations with the brands. Together with the union at Huabo Times in Myanmar, who are also fighting against union busting in a factory supplying Inditex, Bestseller and Primark, they wrote an open letter to the owners of Inditex, Bestseller and Tally Weijl. Two social media action days, supported by CCC, helped to maintain public pressure on the brands. The unions also coordinated closely with the Spanish union CCOO within the context of the IndustriALL GFA signed with Inditex.

Brand engagement has been a vital step in terms of reaching this agreement. Inditex finally met with the union president and factory management on 2nd July, and then took a leading role in negotiations. In parallel, Tally Weijl responded to campaigning and the union letter by committing to meet with the union and contacting the management. In comparison, Bestseller did shamefully little to help resolve this case, refusing contact with the local union and failing to engage in any communication on the case from 12th June onwards. This is a failure to take their own code of conduct seriously and to take action when violations occur.

We hope that this agreement will mean a significant improvement for industrial relations at the Rui-Ning factory, and provide the basis for ongoing social dialogue between the union, the factory and the brands. Further monitoring will be necessary to ensure the just implementation of the agreement, in particular regarding the priority rehiring of fired union members. This agreement, however, marks a very positive step for the Myanmar labour movement, and establishes a precedent for brands to engage directly with local unions at their suppliers.