Union busting in Myanmar under guise of Covid-19

Myanmar’s young and vulnerable trade union movement is being threatened under the guise of Covid-19, as selective dismissals of union leaders and members seek to undermine the workers’ rights movement. 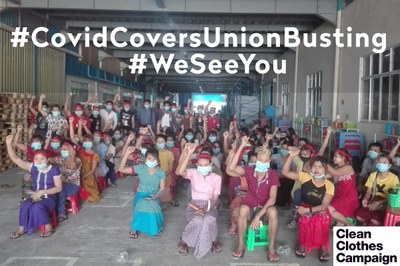 This is an urgent issue. Brands need to take immediate action to stop such discriminatory lay-offs within their supply chains. The current spate of union busting cases are part of a wider picture of trade union repression in Myanmar, which includes violent assaults on union leaders, harassment and intimidation of members, and the recent arrests and imprisonment of workers for joining peaceful strike action.

The following three cases, Rui Ning, Huabo Times and Myan Mode, all follow the same pattern: over the past few months a disproportionate number of union members were laid off after the union raised its voice over unsafe working conditions relating to Covid-19 and unpaid wages. All three factories include Inditex (who own global fashion label Zara, among other labels) as a major buyer, and Rui Ning and Huabo Times both involve Bestseller (who own fashion label Only). Both these companies have Codes of Conduct that protect Freedom of Association in their suppliers in Myanmar, however this appears to mean nothing on the ground as unionised workers were fired under the cover of necessary Covid-19 action. While some level of retrenchment may be inevitable due to the current global crisis, the key is to ensure that downsizing a factory’s workforce is not used as a means with which to discriminate against union members, and intimidate workers from joining a union. In terms of addressing these blatant violations against freedom of association, Inditex and Bestseller are doing little to provide space for local unions at the negotiating table or to ensure that the terms of negotiations are in-line with the human rights pledges the brands have publicly committed to adhere to.

Inditex is owned by Amancio Ortega, the world’s sixth-richest man. The brand has serious power within the industry, with net sales of $19.82 billion in 2019, made possible from dubious purchasing practices, including sourcing from countries such as Myanmar, where workers’ wages are amongst the lowest in Asia. Early in the onset of the pandemic, Inditex pledged to pay for all its orders and work closely with its suppliers to prevent job losses. Now they need to urgently put action behind their words and respond to the growing number of union discrimination cases within their supply chain.

Bestseller is owned by Anders Holch Povlsen, a Danish billionaire worth nearly $10 billion. Both brand and owner have been in the Danish media recently for receiving large sums from the Danish government to cover wages as part of a Covid-19 crisis fund, yet at the same time refusing to pay rent on their shops around the country. Following negative media coverage, Bestseller changed their position and agreed to pay the rent they owed. Proof that coverage of brands harmful actions can provoke positive change.

Myan Mode. Brands involved: Inditex (owning global brand Zara) and Mango. On 28th March the factory management dismissed 571 workers out of 1,270, under the guise of necessary Covid-19 action, including all 520 union members. The Myan Mode union was one of the strongest in the country’s garment industry, with a history of strikes to improve wages and working conditions. In solidarity, during the first week of April, 50 additional workers walked out of the factory. They were also dismissed by management. As of 30th May, the active case concluded with the union and management signing an agreement concerning the reinstatement of 75 dismissed union leaders and workers. While this is a victory within the context of the local union being involved in negotiations, it is disappointing that the brands, in particular Inditex who held the largest sway in terms of orders, did not push for the reinstatement of all dismissed union members. Instead, 545 of the fired union members will be considered for re-hiring once the business resumes at a pre-Covid level, but only if they fit the management’s new requirements. The brands also did not push for the union to be involved in negotiations on retrenchment policies. In such a clear case of union busting, severance pay for workers should not be the standard to aim for.

Rui Ning. Brands involved: Inditex (Zara), Mango, Bestseller (Only), Tally Weijl, and Balala. 324 workers out of a workforce of 1,100 were dismissed in early April, of which 298 were union members, including the union president. The president was also attacked with knives in suspicious circumstances and, in what is likely to have been part of a concerted effort to intimidate and threaten union leaders, it’s possible that the attackers were affiliated with the factory management. In response to external pressure, the management issued a statement on 5th June regarding the reinstatement of the union president, however the management has subsequently withdrawn the statement and is refusing to reinstate the union leader. The management has also failed to resolve a wage dispute regarding legally-owed wages withheld by the management, nor has it provided adequate health and safety measures, regarding Covid-19 and wider issues. On 19th June, an electric fire took place in the factory after concerns over electrical safety had already been raised by the union and ignored by the management. Immediately following the fire, while the cause was still being investigated, workers were not allowed to evacuate the factory but instead instructed to keep working and informed that if they left the factory because they did not feel safe they would lose half a day’s wage. The union has updated its demands to reflect the ongoing situation and, as of 21st June, they are: 1) Immediate reinstatement with back pay of the union president and assurances that all other dismissed workers will be recalled to work at the soonest possible date as business returns to normal. 2) Health and safety conditions at the factory must be improved. Additionally, the union leaders must never be punished using wage deductions in retaliation for the time they spend seeking such workplace improvements. 3) Unpaid wages legally entitled to workers but withheld by management during April and May must be paid in full immediately.

Huabo Times. Brands involved: Inditex (Zara), Bestseller (Only) and Primark. Fearful for their jobs, workers sought reassurance from the factory that they were not going to downsize their workforce in response to Covid-19 and, following this, a group of workers registered a new union on 11th May. Only three days later, on 14th May, the management dismissed 107 workers, of which 26 were union members, including 4 union executives. Of the other 81 workers dismissed, the majority were openly supportive of the new union and the management were aware of their support. Repeated requests from the union to meet with the factory management have not been granted and their demands for the immediate reinstatement of all union leaders and workers, and the inclusion of the union in consultations on retrenchment policies have been ignored.

Brands should not be allowed to use this pandemic to deflect from their responsibilities. Covid-19 must not be used as a cover for silencing workers and trampling on their rights. The Clean Clothes Campaign is calling upon all brands to take preventative measures to ensure non-discrimination in retrenchment and re-hiring decisions. Brands and retailers need to request that all suppliers develop clear policies that ensure Covid-19 is not used as a cover for union busting. In factories where there is a union, these policies should be negotiated with and signed off by them. All retrenchment proposals should be monitored by brands to ensure that they do not disproportionally affect trade union members and leaders, women (particularly pregnant women), or workers on permanent contracts. In cases where retrenchment has had a discriminatory effect, the process should be invalidated and redone following best practice procedures. Orders should only be re-started with factories where such policies are in place. The policies should be based on the relevant ILO conventions and take the Better Work guidance into consideration.