As witness signatories to the Accord on Fire and Building Safety in Bangladesh, we are concerned about the potential negative impact on worker safety, both short-term and long-term, of the recently concluded Memorandum of Understanding (MOU) between the Accord and the Bangladesh Garment Manufacturers and Exporters Association (BGMEA) and the diverging interpretations that have emerged over the last few weeks. 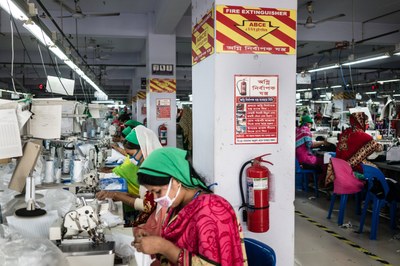 The Accord is the most effective labor rights initiative ever carried out in contemporary apparel supply chains. The Accord’s life-saving work has eliminated more than 90% of the safety hazards originally identified by Accord inspectors. As a result, more than 2.5 million garment workers are now employed in vastly safer factories.

However, substantial work remains to be done and the most challenging and expensive fire safety and structural renovations remain outstanding at a substantial number of factories. For example, the majority of covered factories have not yet had their automated fire alarm systems fully installed and certified. A new program to prevent deadly boiler explosions still remains to be executed. Equally important, gains achieved to date need to be maintained through ongoing monitoring. Since the announcement of the renewed 2018 Accord, this essential work has been challenged by the resistance of the Bangladesh government and the BGMEA to the Accord’s continuation.

It was vitally important to move past this conflict – but essential to do so in a way that preserves the Accord’s credibility, independence, and ability to function effectively. Of paramount importance to the Accord’s work is the power of the Accord inspectorate to make independent safety judgments, including decisions concerning the termination of factories, without interference by factory owners and brands.

Short-term Impact of the MOU

The MOU allows the Accord to operate legally in Bangladesh for 13 more months. However, we have serious concerns about to what extent it also preserves the Accord’s independence and ability to function effectively during that period. Whereas the Accord has publicly stated that, under the MOU, all operations, staff, infrastructure and functions of the Accord will continue as before2, the BGMEA has voiced a different interpretation3. According to the BGMEA, the MOU, beginning immediately:

The Accord’s power to direct brands to strip business from unsafe factories has been the linchpin of its success in driving safety improvements. If BGMEA’s interpretation of the MOU’s terms prevails, the Accord will no longer be an independent body with the power to direct collective action by brands, hold factory owners accountable and effectively protect workers’ safety.

It will become clear, in the weeks ahead, whether the Accord can still operate as an independent guarantor of worker safety.

Long-term Impact of the MOU

After 13 months, the MOU calls for the Accord to end its Bangladesh operations -- a year earlier than the time-frame set forth in the 2018 Transition Accord agreement -- and to be replaced by a new entity of uncertain character. The MOU leaves virtually all significant decisions concerning the nature of this entity for future discussion, stating only that the new entity will absorb the Accord’s operations; that BGMEA, as well as brands and unions, will play a leadership role; and that the entity will observe the Accord’s transparency provisions.

No one can assess the viability of this new entity as a protector of worker safety until the structure and rules under which it will operate are decided. Will worker representatives have equal voting power to corporations on its governance body? Will the entity’s inspectorate be independent and shielded from interference by factory owners? Will the inspectorate have the power to strip factories that refuse to comply with safety requirements of their ability to sell to participating brands? Will brands be obligated to provide financial assistance to cover the cost of safety renovations at their suppliers? The Accord is effective because it incorporates these elements. If the new entity does not, it will fail.

Brands Still Have the Power to Ensure an Independent Accord

Despite the weaknesses of the MOU, the Accord brands retain sufficient leverage over their Bangladeshi suppliers to secure a decent outcome for the workers who sew their clothes. We believe that every responsible brand will exert this power in the weeks and months ahead to ensure that the Accord inspectorate retains its vital independence in the short term and, in the longer term, is succeeded in Bangladesh by a set of enforceable arrangements that guarantee effective, independent safety regulation.

1 A first response to the MOU with the witness signatories’ concerns can be found here
2 https://bangladeshaccord.org/updates/2019/05/19/accord-reaches-resolution-on-continuation-of-its-work-in-bangladesh.
3 BGMEA’s press release is available on file with the witness signatories.
4 See: CCC, ILRF, MSN, and WRC, “Bangladesh Government's Safety Inspection Agencies Not Ready to Take Over Accord's Work,” April 2019, https://laborrights.org/rcc.