In recent months, the Sri Lankan government increased its repression amidst an economic and political crisis, sending in the army on workers protesting peacefully. Today our partners Free Trade Zones & General Services Employees Union together with the National Labour Advisory Council Trade union Collective are holding a members rally at the Public Library in Sri Lanka’s capital, Colombo. 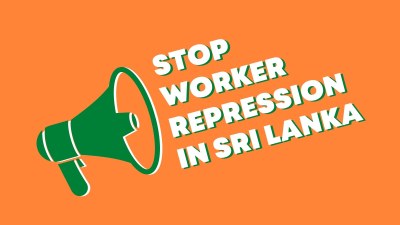 CCC, Labour Behind The Label, Maquila Solidarity Network, Workers United and War on Want support the demands of the unions, who condemn the government’s disregard for the voice of trade unions and demand the Labour Ministry calls for an immediate meeting of the National Labour Advisory Council.

Women workers in Sri Lanka make up the majority of the country's garment workforce, and they are the drivers of an industry representing 40% of the country’s total exports.

Sri Lanka is in an economic and political crisis and the midst of this, the government has been increasing its repression of worker protests and industrial action. Nevertheless, the deteriorating worker rights situation in the country has been largely ignored by the international community.

Beginning in February 2020, as the impact of COVID-19 began to unfold around the world, garment manufacturers and governments began to use the pandemic as a pretext to suppress workers’ rights. In Sri Lanka – where the export apparel and footwear industry directly employs at least 350,000 workers and represents 40% of the country’s total exports – the situation was no different. Faced with unprecedented economic uncertainty, garment manufacturers began to circumvent their responsibilities to their employees and the government failed to enforce its own law.

The situation in Sri Lanka for workers is worsening. Worker surveys in dozens of supplier factories indicate a general decline in brand and retailer orders, resulting in a loss of regular and overtime hours and a consequent decline in earnings. Sri Lanka garment workers were already earning far below a living wage before the crisis, and any loss of income, combined with a 70% devaluation of the currency through inflation, means they are being pushed below subsistence level even as suppliers and brands profit from the wage depression.

Although trade unions demanded LKR.10,000 as Economic Relief Allowance (ERA) to manage the economic crisis, only a few suppliers paid LKR.10000, most others were paying less than that, and some paid even as low as LKR.2500 per month. Now we have been informed that most of the suppliers who were paying an ERA have either reduced or stopped altogether, even though the food inflation has increased to 93%.

Workers in Sri Lanka have faced systematic violations of rights by employers for decades and COVID-19 created even more precarious working conditions. At a time when workers require more protection and representation than ever before, unions play a critical role in safeguarding workers’ rights. Unfortunately, instead many manufacturers have continued to suppress workers’ union activities at factories, including by dismissing union activists.

The Sri Lankan government itself is ignoring its legal obligations concerning social dialogue and has failed to convene the tripartite National Labour Advisory Council which should meet every month. In recent weeks the FTZ and GSEU trade union, the largest trade union in the garment sector has been targeted with increasing repression; including two office break-ins, where documents were rifled through as well as the sudden refusal to acknowledge its annual reports by the Trade Union Registrar who have instead stated that there are issues with the FTZ and GSEU’s constitution and their registration, is therefore problematic. This suggests that there is a concerted effort by authorities to target the FTZ and GSEU union and limit their support for garment workers.