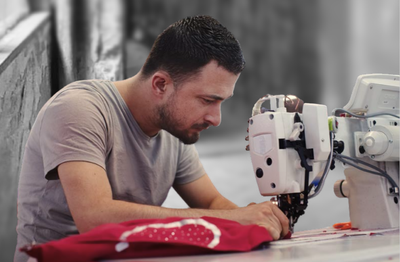 The top five export destinations for clothing made in Turkey are Germany, Spain, UK, Netherlands and France. Despite the big-name brands these workers produce for, new research shows that garment workers earn poverty pay which leaves them struggling to survive, highlighting the inadequacy of the legal minimum wage.

The Clean Clothes Campaign Turkey (CCC Turkey) investigated the working and wage conditions of garment workers in Istanbul and Izmir – the two major centres of clothing assembly in Turkey. By interviewing hundreds of workers the researchers learnt that garment workers are barely able to sustain themselves, a situation that has been ongoing since Turkey became a major fashion exporter in the 1980s, and has worsened in recent years due to the pandemic and hyper-inflation of 86% in 2021 alone.

Such extreme inflation has made it even harder for workers to make ends meet. Despite hikes in the legal minimum wage, workers only survive by constantly juggling debts, holding multiple jobs or giving up education for work. “Because I have debt, my child quit his education and started working” reported one worker. Increases in the statutory minimum wage has not compensated for the falling purchasing power of wages. The minimum wage only covers a quarter of what is needed for basic living expenses. The report found that one in three garment workers earns just the legal minimum wage – even with overtime. The minimum wage currently in Turkey is 4.253 TRY or 241 EUR net, but a basic living wage would be at least 13.000 TRY or 880 EUR (for January 2022), states CCC Turkey. Calculations by the Confederation of Turkish Trade Unions (TÜRK-İŞ) have found similar results.

Bego Demir, CCC Turkey’s coordinator, states that “due to hyperinflation, garment workers in Turkey are confronted with the insoluble problem of sustaining their families. The state gives incentives to employers, but it doesn’t control the implementation of labour law in the sector. This research shows that the Turkish government must meet its monitoring obligations to make sure the law is fulfilled. All brands that have their supply chain in Turkey also must make sure all the workers behind their products reach all their rights.”

The garment, textile and leather industries are among Turkey’s major economic sectors in terms of GDP, exports and employment, however state monitoring of working conditions is weak. In particular, trade union rights are being obstructed by factory owners and legal protections for workers, especially in terms of their right to freedom of association, are half hearted, or absent altogether. As a result, more than half of all workers toiling in the Turkish garment industry don’t have a labour contract or benefit from social security; and exploitation is rife, particularly of immigrant labourers and refugees. Workers often work excessive overtime hours, with factory management violating labour laws, because their wages do not cover their expenses. “My monthly average wage reaches 5,000 TL with overtime work. When I need money, I work till morning in the workshop or find a job as day labourer in other workshops. There are three people working in our family, but we still have loans,” says one garment worker.

An effective EU-supply chain law would enhance the protection of workers rights also in Turkey. Workers would no longer depend on the mercy of brands.

For detailed information, the research report can be found here.

For a summarised overview, the country profile can be found here.