Solidarity statement on the first anniversary of attempted coup in Myanmar

Clean Clothes Campaign's statement of solidarity with the people of Myanmar on the first anniversary of the attempted military coup. 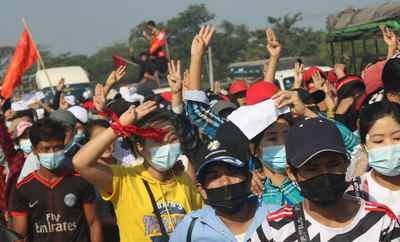 The Clean Clothes Campaign network stands in solidarity with the garment workers, trade unionists, labour rights activists and human rights defenders of Myanmar today, on the first anniversary of the attempted military coup, and every day. We use ‘attempted coup’ because the military junta have no legitimacy as the leaders of Myanmar; they have tried to take power by force but the people of Myanmar have bravely fought back and continue to risk their lives to stand up for their rights, their democracy and their freedom.

Garment workers have been at the forefront of the resistance over the past year. They have taken to the streets, spoken out, protested via any means possible; they have shared their stories and carried on fighting for workers’ rights in the face of targeted attacks, brutal oppression and violations on fundamental human rights. The junta have cracked down on all opposition and threaten dissenters with imprisonment, torture and even death. Since February 1st 2021, they have arrested, charged or sentenced 8835 people, including many labour rights activists, and 1503 people have been killed by them.* The hard-won gains made by the young union movement have been rolled back, labour activists have been forced into hiding and union busting is rife in factories. Covid-19 has only increased the hardships faced and the combined effects have brought economic instability, mass job losses and widespread poverty. Garment workers who still have their jobs are at higher-risk of catching Covid-19 due to overcrowded living and working conditions and a lack of adequate personal protection.

In such a volatile situation, brands may be tempted to cut and run, and many already have, but our message to brands is that they should prioritise workers’ rights above all. Those sourcing from Myanmar have a clear responsibility to ensure their actions do no harm and that they are taking concrete steps to protect workers. This means undertaking heightened, ongoing and context-specific due diligence that prioritises workers’ safety and rights. It means finding safe ways to engage directly with workers to hear their needs, and to respond to their demands. Brands due diligence needs to run through their whole value chain, not only their closest suppliers, and they need to follow the money at every stage to ensure that they are not inadvertently putting it into the hands of the military. In Myanmar, as in every garment producing country, brands have power and they should use it for good.

For brands that choose to disengage from Myanmar, they must do so responsibly, meaning they must honour all commitments and payments, and ensure that workers receive all wages, severance and benefits owed to them. A responsible exit does not mean simply pulling out of the country and turning their back on workers, but instead engaging wherever possible to protect rights and lives.

Clean Clothes Campaign calls for the international community to increase efforts to oust the junta and to condemn in the strongest possible terms and with the strongest possible measures the serious and ongoing violations of human rights. We call on the EU to withdraw the Everything But Arms (EBA) preferential trade tariff which allows businesses in Myanmar to export goods tariff-free to the EU market (excluding weapons and ammunition). As a result of the EBA, more than half of Myanmar’s total garment production is exported to Europe. Thus far, the EU has employed targeted economic sanctions against the junta but we ask for this to be stepped up, with increased targeted sanctions against military-owned businesses, as well as with EBA withdrawal.

Over the past year the junta have systematically wiped out progress in the labour movement, and many labour leaders have been arrested and remain in prison, yet garment workers and labour rights activists have not lost hope. Clean Clothes Campaign stands with workers in their struggles, and we celebrate their wins, such as the release from prison of Daw Myo Aye, leader of Solidarity Trade Unions of Myanmar, after six months detained by the military. We will continue to amplify workers voices and demands and we ask for our supporters to also stand with the garment workers of Myanmar, to share their stories and ensure the world doesn’t forget about what is happening, because in solidarity there is strength and hope.

*Statistics via the Assistance Association for Political Prisoners (Burma)