Out of sight - Informal employment in the garment industry.

A new report on informal employment in the garment industry by Clean Clothes Campaign Turkey: Working without social security is “ordinary” for a garment worker, and retirement is beyond their wildest dreams. 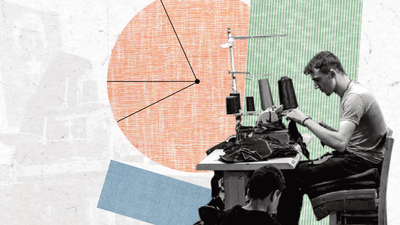 In Turkey, both the state and major ready-made garment brands seem to have left the social security coverage of workers at the mercy of small enterprises in the supply chain. Although brands have announced 'codes of conduct' regarding the working conditions in these enterprises and to prevent informality, the rights of social security and retirement have become a distant dream for workers.

Clean Clothes Campaign Turkey (CCC Turkey) investigated the causes and effects of informal employment in the garment industry. According to the report most of the workers in the textile sector feel obliged to work without social security. Working without social security and overtime are considered “normal” in the sector. The prevalence of child labor, low wages and the cycle of poverty are predisposed by informal employment.

The research is conducted with 62 workers and 19 small-scale employers in regions where informal employment is prevalent. The report determines the causes and consequences of informal employment, an open sore of the sector, directly referring to the experiences of workers and small enterprises on supply chains. Based on the data obtained from in-depth interviews, the report provides policy recommendations for both brands and the government. According to official sources, the rate of informal employment in the garment sector is approaching 50%. However, considering the lack of inspection observed in the research field, it is obvious that this rate must be much higher in reality.

The majority of garment workers participating in the research are young people between the ages of 16-30. The monthly wages of informal garment workers was ranging between 3000 and 4500 TRY (193 - 289 euro) net for the majority of them and was approximately 5000 TRY (321 euro) net for skilled workers in the 2022 spring. The minimum wage was 4253 TRY (273 euro) net at that time, which reveals the poverty forced on these workers who have to make a living below minimum wage. A young worker recounts why he does not have social security coverage: “We were kids back then. We were underage for being formally employed. We worked without any social security. There was no other available option.”

Major ready-made garment brands as well as the government are well aware of the informal employment in the sector. The inspection and information practices are so insufficient, neither the law nor the code of conduct is complied with. While the inspection of brands is limited to product quality, they completely ignore subcontractors under the main tiers in the supply chain.

Workers in the industry have very limited, often incomplete or inaccurate information about social security. It appears that some employers are taking advantage of this fact and avoid taking action against the dissemination of incorrect information. "Even if we want the social security coverage, our employers can’t provide that. The workshops have a set limit of 20 formal workers. I demanded my social security contributions to be paid (from my boss). He said he would, but he didn’t." Said one worker. The report corrects misinformation encountered in the research field.

Both brands and the state have responsibilities for conducting social inspections to ensure the rights of the workers are respected. However, the inspections focus on ensuring the profit rather than the proper working conditions. Brands constantly monitor the quality of the work and put pressure on the subcontractors, however they do not inspect the working conditions. Although the state checks whether the workplaces have business licenses and pay their taxes, the inspections do not involve preventing informal employment. Only 4 out of 62 workers (6%) mentioned that they witnessed an inspection from brands or the state. One worker shares a sole memory of governmental inspection: “I was very young, I don't remember the details, but when the municipal police arrived at our workplace, we were brought down to the basement.”

Employers can easily avoid the audits. One of the employers says: “We were audited but not penalized because we kicked uncovered employees out the back door.” And another employee did not hesitate to state: “In these kinds of inspections, you usually agree on paying the ticket. Same situation happens everywhere. If this happens to me tomorrow, I will burn this workplace down. If I’m forced to evacuate my workplace and leave the neighborhood, I will report all the informal workers at workplaces near mine.”

The current working conditions in the garment sector and the “normalization” of informal work prevent workers from dreaming a future, forcing them to only “save the day”. 80% of the interviewed workers do not mention retirement considering their losses due to informal work, and when it is reminded they only express their despair about retirement. “Normal” working hours in the sector reach 10 - 11 hours, and overtime wages are calculated above this “normal”.