On International Women's Day we call on Nike to #PayYourWorkers

On International Women's Day, Clean Clothes Campaign global network supports the workers of the Ramatex factory in Cambodia who lost their jobs and were left with nothing after years of making clothes for Nike. Sign the email petition and tell Nike to #PayYourWorkers. 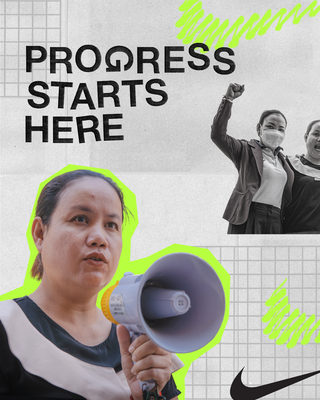 Support the women workers who made Nike clothes

Send an email to Nike, calling for them to pay the women in their supply chain! In Cambodia, all of its workers - a group of mostly women - lost their jobs in July 2020 when the Violet Apparel factory, owned by the Ramatex Group, suddenly closed. In response, the workers demanded compensation, as well as their legally owed bonuses and unpaid wages. Nike is the biggest buyer from Ramatex, and Matalan was a large buyer from the Violet facility. The union is demanding $1.4 million unpaid compensation and damages as workers are entitled to under Cambodian law. Both brands have thus far failed to take responsibility.

Women who used to make Nike clothes for years were left without income or compensation right in the first months of the pandemic. They have been fighting for their rights ever since. Add your voice to theirs and sign the email petition.

The workers also wrote a letter to Nike, calling Nike out on their sustainability slogans. Read it here.

Nike has a responsibility to ensure that these workers are paid for their labour, as do the other identified buyers from Ramatex: Matalan, Under Armour and Uniqlo.

Call on Nike to pay the workers making their clothes

As described by the Worker Rights Consortium: "Under Cambodian law, workers on permanent contracts, like those employed at Violet Apparel, must be given advance notice between one week and three months before a layoff, depending on their seniority, and, if this does not happen, they are entitled to pay for that period of time. Based on the average seniority of the Violet Apparel workers, management
should have given them, on average, two months’ advance notice. However, the factory notified workers only one day before the factory closure and failed to provide any notice pay.

In addition, Cambodian law states that workers are owed damages if they are dismissed without valid reason. While Violet Apparel has claimed it lost orders due to the Covid-19 pandemic, its parent company, Singapore-based Ramatex Group, never provided evidence indicating the necessity to close this particular unit, amongst its 15 production facilities."