Clean Clothes Campaign weekly blog: the workers behind the industry

This blog aims to collect weekly information about the conditions of garment workers around the world; wage disputes, risks to their safety at work, discrimination, the impact of the cost of living, and how COVID-19 is influencing garment workers' rights in supply chains around the world. It will be updated as new information comes in from media and the Clean Clothes Campaign global network. Information is posted as it comes in from the network and cannot always be double-checked.

Asia remains the garment factory of the world, yet the sector faces an array of challenges many of which have been accelerated by the COVID-19 pandemic, according to a new ILO report.

Employment, wages and productivity in the Asian garment sector: Taking stock of recent trends reviews employment, wages and labour productivity in the Asian garment sector over the 2010-19 period. It highlights how the industry still accounts for 55 per cent of global textiles and clothing exports and employs some 60 million workers.

Bangladesh: Media report that leaders of the Garment Workers Trade Union Centre on Friday called upon the factory owners to pay wage and festival allowance of the garment workers before Eid–ul-Adha.

The union's president Mantu Ghosh called on the government and the garment factory owners to pay wage and festival allowance of the workers before Eid-ul-Azha.

He also asked to form a wage board to revise the wages of garment workers Tk 20,000 per month and give 50 per cent dearness allowance before implementation of next wage board.

General secretary of the organisation Joly Talukder said that the garment workers were low paid and so they could not run their families amid price hike of the essential commodities.

Cambodia: Media report that a truck transporting garment workers to their factory flipped onto its side in the southwestern Kampong Speu province on Saturday 25th June, leaving 27 people wounded, a senior police officer said.

Media report that the Ministry of Labour and Vocational Training has stated that the minimum wage negotiations for textiles, garments and footwear for 2023 will start from July of this year.

European Union: Media report on whether the EU’s mandatory due diligence law cover just 1% of businesses.

As a key figure behind the European Parliament’s push for mandatory corporate sustainability due-diligence legislation, Dutch politician Lara Wolters believes the time of “I didn’t know” is over.

If adopted, the law would require EU and non-EU companies of a certain size and net turnover to take responsibility for human rights and environmental abuses that may occur in their supply chains, administrative and civil liabilities included.

Wolters credits the work of human-rights and environmental campaigners for pushing the conversation to its tipping point. “I think it’s a bit like throwing stones into a river,” she said. “You won’t see the stones at first but at some point, you’ve created a bridge. And I think that we’re at a point now where civil society and NGOs have done a lot of that work for us to be able to walk over the bridge.”

Myanmar: Media report that at around 3:15 a.m. local time on June 25, a fire broke out in a garment factory in the Dagon Port Industrial Zone, Yangon, Myanmar. According to witnesses, the fire was so large that almost the entire factory was caught in flames. No injures have been confirmed or reported.

Turkey: Media report on child labour in Istanbul. Especially in İkitelli, where textile workshops are concentrated, where Syrian children work intensively in workshops, as well as Turkish children. For Media, a 15-year-old, one day passes like this: “I wake up at 7 every day, then I come here [to the factory]. We start work at 8.30. I leave work at 8 pm. I work an average of 10-11 hours. I'm so bored here. I was very tired of textiles and working.”

USA: Media report that the US fashion industry is urging the European Union (EU) to take on board lessons learned in the US as it prepares to introduce legislation to ban the sale of products made with forced labour in the single market.

The EU has been consulting on its plans to introduce new legislation which would follow similar moves in the US, such as the Uyghur Forced Labor Prevention Act (UFLPA), to ban imports of products made with forced labour.

Vietnam: Media report﻿ that 1,025 workers in Hanoi's textile and garment industry trained in fire prevention and fighting for their rights. The Executive Committee of the Grassroots Trade Union of Dai Nghia Garment Export Co., Ltd (belonging to the Hanoi Textile and Garment Industry Union) coordinated with the Board of Directors and the Hanoi Police Department to organize training on fire prevention and fighting for 1,025 union members and employees. 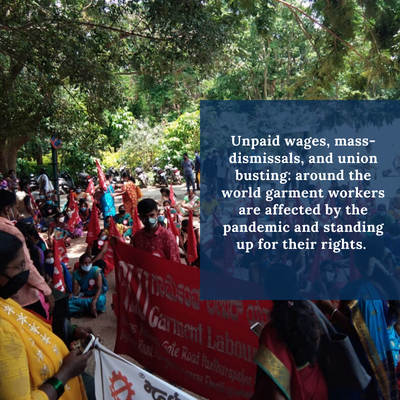 General info on COVID-19 in the garment industry

The Circle has created a guide for suppliers in the garment industry on 'force majeure'.

WRC's brand tracker on which brands pay for orders

Business and Human Rights Resource Centre maintains a continually updated live-resource of articles on the influence of COVID19 on supply chains and is tracking brand responses to the crisis in dealing with their orders.

Labour Start collects materials coming in from trade unions around the world.

ICNL has a civic freedom tracker.

Omega research foundation tracks excessive use of force by law enforcement during the pandemic.

WRC's white-paper "Who will bail out the workers?"

AFWA's paper The emperor has no clothes.

UN Special Rapporteur report "Looking back to look ahead"