May 15th marks nine years since the signing of the Accord on Fire and Building Safety in Bangladesh. So far, the trailblazing, legally binding agreement has protected over two million garment workers by making sure 1,600 factories in Bangladesh meet safety requirements, but Levis and IKEA refuse to sign. 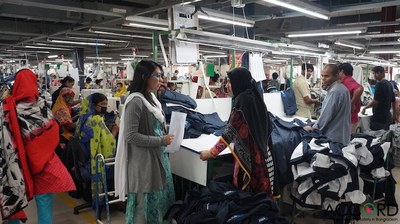 The Accord came as a response to the devastating Rana Plaza building collapse in Bangladesh, April 2013, which saw 1,138 garment workers lose their lives due to incredibly unsafe factory conditions. It took this collapse to finally get brands to come to the table and negotiate a legally binding agreement, which workers, Clean Clothes Campaign, and other advocacy groups had been calling for for years.

173 brands have now signed the updated agreement, the International Accord for Health and Safety in the Textile and Garment Industry – including fast fashion giants like H&M, Inditex (Zara), Fast Retailing (UNIQLO) and PVH (Tommy Hilfiger, Calvin Klein). This new version, which commenced in September 2021, allows for expansion to other countries that also have a history of ongoing violations. This new Accord can make workplaces safe for workers in the global garment and textiles supply chain by establishing independent inspections, remediation, complaint mechanism, and safety committees in factories that supply to international brands and companies.

“10 years ago Pakistan lost over 250 lives in the Ali Enterprises factory fire. We still have no legally binding agreement that forces brands to take action in favour of workers' safety and prevent something horrific like this from happening again. The Pakistani garment and textile sector is in need of an Accord, like in Bangladesh, where brands can be forced to come to the table and listen to the needs of the workers they employ.” - Karamat Ali, Executive Director of The Pakistan Institute of Labour Education & Research (PILER).

Despite the unquestionable need to protect workers, some notable names, which are active in countries with demonstrable safety problems, are still missing from that list. Brands such as Levi’s and IKEA, that pride themselves on sustainability and workers' rights, have refused to sign the accord so far risking the safety of workers in the supplying factories.

Levi’s boasts that it has “established itself as the industry standard bearer for responsible supply chain practices”. Similarly, IKEA has set its own standards with IWAY “based on internationally recognised standards and principles for human rights, environmental protection and worker health and safety, and on our own IKEA values and legal compliance.” However our report, released last month, showed both Levi’s and IKEA’s schemes were woefully underperforming. Neither scheme met the standards of the International Accord when it came to workers safety, with the research showing supplier factories scored very poorly on many safety indicators.

“If Levi’s and IKEA were as committed to sustainability and wellbeing as they claim, their names would be on the Accord. Every day that Levi’s and IKEA refuse to sign the Accord, they put their own workers' lives on the line. It’s time that brands, particularly those who brand themselves as ‘sustainable’ and focused on ‘worker-wellbeing,’ take committed steps to achieve those goals by signing the only legally binding agreement, the Accord.” - Ineke Zeldenrust of Clean Clothes Campaign.

Both Levi’s and IKEA hide behind these self-devised schemes as a reason for not signing the Accord. Yet neither scheme has any binding mechanisms for implementation or any systems in place by which factories can hold the brand accountable for failures in implementation. Essentially, these are PR mechanisms to trick consumers into thinking Levis and IKEA care about workers' safety. IKEA’s

“By making brands actually listen to the safety demands of factory workers, the International Accord has been able to prevent another disaster like Rana Plaza in Bangladesh. By refusing to sign the Accord, brands like Levi’s and IKEA are putting their own profit over the lives and safety of people who work tirelessly for them. It’s time for all brands who operate in Bangladesh to sign the accord and for those that refuse, to be publicly shamed.” - Amirul Haque Amin, President of the National Garment Workers Federation in Bangladesh.

In 2022, the Accord Steering Committee will expand the International Accord to another country. The Committee is currently selecting which country they will expand to next.

“Garment workers, regardless of where they are in the world, deserve to feel safe when they go to work. Workers in Sri Lanka want to have the ability to hold brands accountable for their own safety, as they have been able to in Bangladesh.” - Anton Marcus, ​​Joint Secretary of the Free Trade Zones and General Services Employees Union, Sri Lanka.

A full list of which brands which did and did not sign the Accord is available here.

Read our FAQ for more information on the Accord.