A new brief, published by labour rights groups ahead of Inditex’s shareholder meeting of 13 July, shows that the company urgently needs to sign a new binding agreement on factory safety in Bangladesh before the current programme runs out on 31 August 2021. The Accord on Fire and Building Safety in Bangladesh, the most successful safety programme in the contemporary history of apparel supply chains, has enabled great progress, but Inditex must not ignore the deadly hazards that remain. 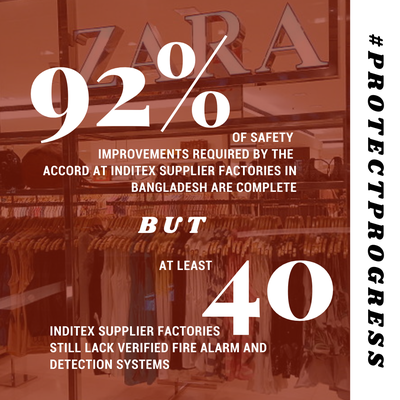 Inditex—one of the world’s largest fashion retailers and owner of eight brands including Zara—was an early signatory to the Accord in 2013. As a member of the Accord’s Steering Committee, Inditex knows first-hand how effective the Accord has been at making factories safer for more than two million garment workers over the past eight years. Inditex has spent the last few months negotiating with unions, but it has as yet failed to conclude and sign a new binding agreement, and time is running out.

This brief, based on a review of the Accord’s publicly available factory-by-factory data on safety progress, shows that, thanks to the Accord, 92% of identified safety hazards in Inditex supplier factories in Bangladesh have been corrected. At the same time, however, life-threatening safety hazards remain. At the 54 Bangladesh Inditex supplier factories that the witness signatories to the Bangladesh Accord identified, a staggering 40 still have no verified fire alarms, 38 do not have verified fire suppression systems such as sprinklers, and in 35 factories workers could get trapped in case of a fire.

This brief, which follows an earlier report on the remediation of safety hazards in suppliers of 12 other brands, argues that the Accord’s work must be safeguarded and expanded to other countries, and calls for Inditex to take the lead in signing a new, legally binding safety agreement. Shareholders, such as Fundacion Finanzas Etica on behalf of Shareholders for Change, an European network for shareholder engagement representing approximately €30 billion assets under management, have been engaging with Inditex to urge adoption of a new binding safety agreement.

Christie Miedema at Clean Clothes Campaign says: “The brands negotiating a new binding safety agreement must realise that workers’ lives are at risk when they try to bargain on crucial principles that enabled the Accord’s success. The Accord owed its effectiveness to the fact that each signatory brand is individually legally responsible to ensure its supplier factories are made safe. As a steering committee member, Inditex is well-positioned to ensure that this individual legal accountability remains a prerequisite for participation in the safety programme.”

Laura Gutierrez at Worker Rights Consortium says: “A gruesome mass fatality fire in a food processing factory in Bangladesh last week once more showed what is at risk in these negotiations. The Accord has decreased the likelihood of a tragedy like this happening in a garment factory, but the work is not done. In dozens of Inditex factories workers still risk not being able to make their way out of the building during a fire. This tragedy provides a heart-rending preview of the human devastation the Accord’s dissolution would yield.”

More information on the Bangladesh Accord and the campaign to ensure a new binding agreement can be found in this Q&A and this resources page.