After six years of campaigning, the former union of a notorious adidas and Mizuno supplier in Indonesia felt compelled to agree to a financial settlement after workers were illegally dismissed in 2012 following a strike to demand their legal wages. 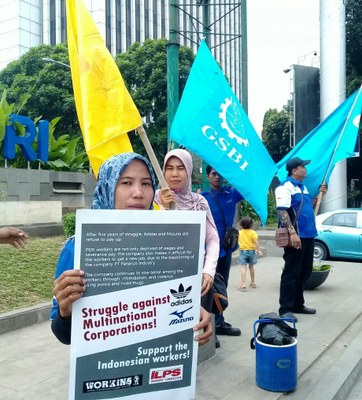 Mizuno and adidas were major buyers from the factory unit of PT Panarub Industry. Clean Clothes Campaign calls the amount paid by the Panarub Group a pittance and supports the workers’ demand to the sportswear brands to ensure full remedy.

In July 2012, 2000 mostly women workers of PT Panarub Dwikarya (PDK) in Indonesia went on strike to demand the payment of the provincial sectoral wage, improved working conditions and the right to freedom of association. On 23 July 2012, 1,300 workers who participated in the strike were dismissed by the factory. Six years on, 284 workers had not received their severance payments, while others felt compelled to accept an earlier, lower offer from the Panarub Group.

The negotiations facilitated by Indonesian authorities started in July 2018 and had been given a deadline of end October. After considerably reducing their demand over the years, the workers latest demand was 1200 EUR (20 million Rp) but this offer was denied by Panarub. Panarub instead pays 300 EUR per worker, regardless of the time they were employed before dismissal. Despite both government and Panarub providing some relief for accumulated debts of the workers, in practice many of the workers have loans exceeding the amount offered and are left with nothing. In the past years, despite the union request to negotiate a collective compensation scheme Panarub had offered workers individual settlements worth just under 240 EUR (4 million Rp).

Kokom Komalawati, president of the union SBGTS-GSBI states: “Full remedy cannot be understood as paying a quarter of the workers’ needs and we expect adidas and Mizuno to make sure the workers receive full remedy.”

Adidas was well informed about the labour rights violations in 2012 that eventually forced the workers to strike. The leading sportswear brand chose to instruct its supplier to no longer produce its shoes at the contested factory; an action that failed to prevent further rights abuses from happening. Other actions conducted by Adidas after the 1,300 workers were dismissed, did not result in effective pressure on Panarub to provide remedy to the workers. Nevertheless, Adidas shoes have been produced at the PDK factory at the time the first union members were dismissed in February 2012 and until shortly before the strike. Furthermore Adidas continues to do business with PT Panarub Industry, the mother company of PDK.

Mizuno, who was urged by CCC and IndustriALL to negotiate with the PDK union in 2015, refused to contribute to a settlement.

Clean Clothes Campaign (CCC) together with German Suedwind-Institute and the Indonesian labour rights organisation LIPS filed a complaint against Adidas to the German National Contact Point of the OECD for failing to provide access to remedy to 327 workers from their Indonesian shoe supplier Panarub. Due to the guidelines of the German NCP, CCC cannot comment on the substance of the complaint during the mediation.

In October 2016 the ILO Committee on Freedom of Association concluded in its interim report that the dismissal of the PDK workers was unjustified and an abuse of the workers fundamental right to freedom of association, according to ILO standards.

Clean Clothes Campaign argues that Adidas and Mizuno have violated the OECD Guidelines for Multinational Enterprises as well as the UN Guiding Principles on Business and Human Rights which state, that companies need to assess their human rights risks, carry out human rights due diligence and in the event of human rights abuses in their supply chain mitigate and provide access to remedy to rights holders, in this case the PDK workers.