by neva — last modified 2019-09-02 14:25
Contributors: 13f11af8dd02495ebe4dcf89231e1fc9
In its 2017 Sustainability Report published today H&M is making bold claims about progress in the area of fair jobs, with a focus on living wage. Clean Clothes Campaign has been closely following H&M’s reporting in this area, as well as gathering information in production countries, and we are compelled to strongly refute the self-congratulatory statements made in the report. 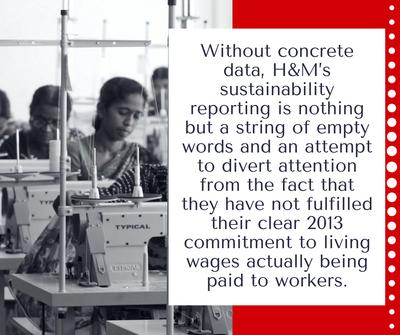 The Sustainability Report is disappointing but it does not come as a surprise, considering that H&M has been steadily rephrasing and diluting the commitment made in 2013. Back then the Swedish clothing retailer announced: “H&M's strategic suppliers should have pay structures in place to pay a fair living wage by 2018. By then, this will reach around 850,000 textile workers.” By now, that commitment has been watered down to the aim of supplier factories representing 50% of product volume using the Fair Wage method. Whether or not this actually leads to the workers being paid a living wage by 2018 is not addressed at all in the report.

“H&M apparently does not care anymore about the wage levels that actually arrive in the workers' pockets,” says David Hachfeld of Public Eye (CCC Switzerland), pointing out that, “H&M is now even less transparent, which is a direct contradiction to the 2013 promise to report in a transparent way about the progress made.”

Indeed, data on average wages at supplier factories is completely absent from the report. "There is no information on wage development at supplier factories per country -- presented in previous sustainability reports -- or any wage development data for the 227 factories using the Fair Wage method. There is therefore no way to establish whether garment workers actually earn more, explains Maria Sjödin of Swedish CCC  member Fair Action.

Hachfeld emphasizes that, “The meagre data that was available in previous years showed only weak real wage progress in the majority of H&M production countries, and where progress was made, this was mostly because of legal minimum wage increases rather than due to H&Ms own efforts.”

Another big gap in H&M’s reporting relates to their purchasing practices. In its 2013 “Roadmap to a fair living wage” H&M promised to make sure that the prices they pay enable suppliers to pay fair living wages. The 2017 Sustainability report provides no clear updates on whether H&M has adapted its purchasing practices to enable higher wages. Measures could include rewarding factories that are willing to raise wages with larger orders, closer cooperation or price premiums as well as selecting factories with better wages when new suppliers are contracted.

We therefore repeat our call for transparency that we included in the letter to H&M’s Board of Directors, CEO and Head of Sustainability on 19 March. Namely, to enable a meaningful assessment of their efforts related to the 2013 living wage commitment, H&M needs to publish the following specific information:

Without such concrete data H&M’s sustainability reporting is nothing but a string of empty words and an attempt to divert attention from the fact that they have not fulfilled their clear 2013 commitment to living wages actually being paid to workers by this year.

As Ineke Zeldenrust of CCC International Office put it: “There is ever more focus on processes, without any clear indication that they have delivered or will deliver actual change. Looking from the perspective of a garment worker living in poverty: a process does not buy you a bowl of rice, cover a medical emergency or make sure you have a roof over your head.”