Protect progress - the International Accord

The Bangladesh garment industry has a long history of factory incidents. The Accord on Fire and Building Safety in Bangladesh, created after the Rana Plaza collapse of 2013, has made a real change by making factories safer. Brand and unions concluded a new International Accord in August 2021 after months of negotiations and campaigning. This Accord continues the work in Bangladesh and allows for expansion to other countries. We urge all brands sourcing from Bangladesh to sign this new Accord.

“The Accord is very important for workplace safety. The Accord works independently and neutrally and has earned a good reputation and credibility, abroad and among workers. The Accord ensures the safety of the workplace for workers.”

What needs to happen and how can you help?

The International Accord can only be successful if it is signed by as many brands as possible, and your help is needed to make that happen. On our brand tracker you can find out which brands have signed the new Accord and which brands still need more pressure to do so.

We need the Accord to swiftly expand to other countries

Take a look this timeline of fatal factory incidents to see why is it urgent that the new Accord is international. You can also about safety in Pakistan, summariesed in our latest report.

Please have a look at our Q&A. Or read the FAQ of the International Accord.

What is the problem?

Many garment brands have their clothes made in factories in Bangladesh. Before the Rana Plaza collapse in April 2013, which killed 1,134 workers, a lot of these factories were no more than death traps. The Bangladesh Accord on Fire and Building Safety was established shortly after and has done important work improving factory safety for 2 million garment workers in Bangladesh. This progress however needs to be protected.

The Bangladesh Accord is so successful because it is a binding agreement that has real punishments for brands, retailers, and factories who do not take enough action. Unions take up half of the seats in the Accord's governance structures and can hold brands accountable. The original Accord ran for five years, and the follow-up Accord ran for three years. Each time we had to campaign hard to convince brands that they need to continue their commitment to factory safety.

In August 2021 a new International Accord was concluded after long negotiations and campaigning. This agreement will also enable for expansion to other countries, something which, eight years after the start of the initial programme, is direly needed. Especially in Pakistan, unions and labour organisations have been calling for an expansion of the Accord to their country for many years.

It's now paramount to ensure that all brands sign on to the International Accord, including those brands that never agreed to sign the original agreement. Not doing so means willingly putting workers' lives at risk. It is also vital to ensure that the process to expand the Accord to other countries moves swiftly and won't limit itself to just one country. Workers can no longer wait for safe factories. Brands have the power to make real changes in their supply chain, they just need to feel the right pressure from all of us to start moving.

All brands sourcing from Bangladesh must sign the International Accord to make sure workers in their supply chain don't have to risk their lives in unsafe factories. 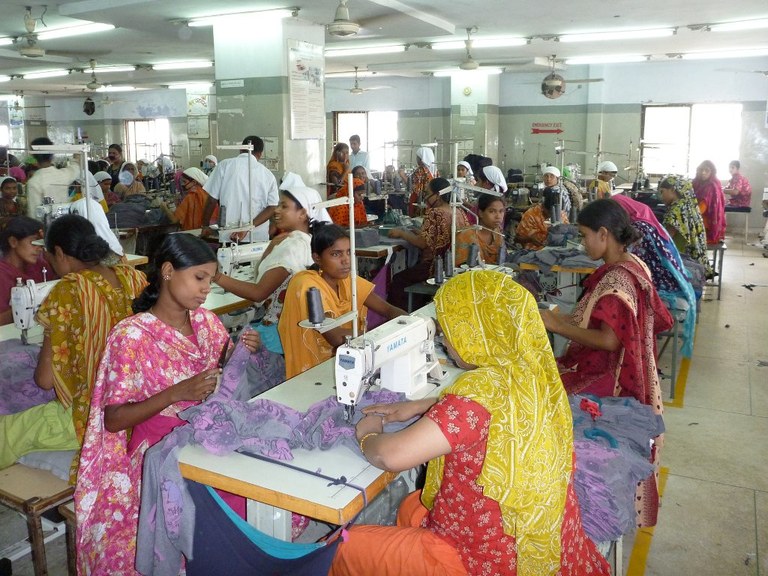 When in 2013 the Rana Plaza building collapsed - killing 1,134 workers - it was clear that something needed to change to address the notoriously unsafe Bangladesh garment industry. Only a few weeks later the Bangladesh Safety Accord was launched. In the past few years, the Accord has carried out inspections, overseen repairs and trained workers in the field of safety covering over 1,600 factories supplying more than 200 brands.

The Accord is a binding instrument initiated by Bangladeshi trade unions and Global Union Federations together with labour rights groups. The first Accord, which had a mandate for five years, has been signed by over 200 global fashion brands and retailers, Bangladeshi trade unions and Global Union Federations. Clean Clothes Campaign is one of the four witness signatories. The ILO (International Labor Organisation) functions as neutral chair.

The Accord requires the signatory brands to disclose who their supplier factories are. The Accord also requires independent building inspections on fire, electrical and structural safety, worker rights trainings, and a long-overdue review of safety standards.

Fashion brands, together with their supplier factory, are responsible to compensate the workers during any closure for remediation and maintenance resulting from the inspections. The inspections are carried out by safety inspectors from international firms, and Bangladesh engineers. The Accord is unique in being supported by all key labour rights stakeholders in Bangladesh and internationally, and being legally binding. The reports of the Accord's inspections along with their Corrective Action Plans are published on the Accord website.

As witness signatories to the Accord we keep a close watch on its work. We are involved in its governance but are also not afraid to speak out when needed. In the second half of 2015 the four Accord witness signatories checked the progress of H&M's most trusted suppliers. The result was shocking: most supplier factories were far behind schedule in repairing the safety defects that Accord inspectors found. Follow up research in January 2016 and May 2016 showed some progress, but still left the majority of these key suppliers without safe fire exits. To increase pressure on H&M we held an international day of action, on which people in over 40 cities worldwide made their voices heard.

When in June 2017 a follow-up programme to the first Accord was announced, the 2018 Transition Accord, this was in recognition that while laudable progress toward safety was achieved since May 2013 much remains to be done to achieve a safe garment industry in Bangladesh. That is why the Agreement mandated a three or possible four year term commencing 1 June 2018. In October 2017 an agreement was reached between the Ministries of Commerce and Labour, the employers' organization BGMEA, and 2018 Transition Accord signatory representatives about a process to regulate a transition to national oversight structures according to rigorous standards. We campaigned hard to convince brands to sign on to this new programme, summing up our arguments in this blog, and this background memo. Almost 200 brands did, including new garment brands and home textile providers.

This first Accord programme ended in May 2018. A new Transition Accord took over, but under difficult circumstances. The government and employers’ organization stated that they no longer needed the Accord. We stressed that there is no other credible way to keep workers in Bangladesh safe. Many worker representatives, brands and other stakeholders joined us in our support for the continuation of the Accord.

The frequent fires that continued to happen in Bangladesh showed that contrary to what the government and factory owners say, national inspection agencies in Bangladesh are not yet ready to take over the work of the Accord. They showed cases of broken promises, unsafe buildings, and factories deemed too dangerous to produce in that continued to operate. Furthermore a closer look at the public data of the national inspection bodies themselves showed many inconsistencies and dangerous lapses. As witness signatories to the Accord we closely follow factory safety in Bangladesh and the operations of the Accord.

Eventually, in 2019 a Memorandum of Understanding was reached between the employers’ organization BGMEA and the Accord. We have our concerns about this agreement especially as in 2020 it was decided to continue on the original time path for transitioning work on the ground to the newly establish RMG Sustainability Council (RSC), despite the fact that the pandemic made normal preparations impossible. We have kept on closely monitoring the RSC over the past months. There are concerns about what the increased influence of employers, which in the past have spoken out against the work of the Accord, will mean for factory safety.

The binding and enforceable character of the programme carried out by the RSC, is only safeguarded because brands and retailers are also still signatory of the 2018 Transition Accord, together with the unions, who can use this agreement to hold brands to account. To prevent the RSC from becoming yet another industry-led voluntary mechanism, a continuation of this binding agreement was needed, as brands and unions agreed early in 2020 (to create a "new agreement between unions and brands to be negotiated with a view for the Accord safety programme to be expanded to Pakistan"). When negotiations actually began in early 2021, brands turned out to want to backtrack on the promise of signing a new international agreement with the unions. Only after long negotiations and massive campaigning, brands and unions eventually concluded a new International Accord in late August 2021 which then took effect on 1 September. This agreement allows for the continuation of the work in Bangladesh with full brand accountability, while the work will be implemented by the RSC, and for expansion to at least one country beyond Bangladesh in the 26 months of the programme.