by paul — last modified 2014-05-26 15:05
An interview with Tola Moeun, an activist with the Community Legal Education Center. He is an activist on labour and human rights issues since 2003. 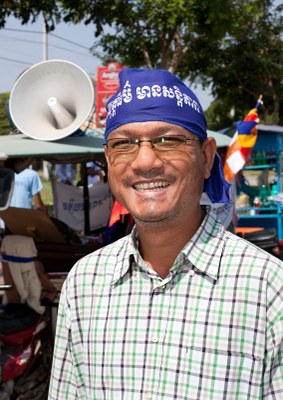 10 December 2013: Tola Moeun has just arrived in Phnom Penh after a ten-day march from the provinces. This annual walk celebrates International Human Rights Day and creates space for dialogue for civil society groups, unions and other human rights groups. Since 2004, hundreds and later thousands of people have joined the 144-kilometre march, which arrives in the capital every year on the 10th of December.

Tola is head of the Labour Programme at the Community Legal Education Center (CLEC) which monitors labour rights and provides legal training, legal assistance and other capacity development and support for the communities. The Clean Clothes Campaign works together with CLEC on human rights violations in Cambodia.

“Workers in the garment industry are kept in slave-like working conditions by two handcuffs and one weapon. Two handcuffs: one is low pay. This makes us work hard and forces us to do overtime. It keeps us from staying home when we are ill or pregnant. The other handcuff is the short-term contract. You cannot take maternity leave, and it prevents workers from joining the union, because their contract will be terminated.
The weapon: that's the violence. This can be physical violence or mental violence, such as verbal abuse and keeping information from the workers.”

“I have worked on labour and human rights issues since 2003. It is inspiring to see how brave and open people are nowadays. After the uprisings in Tunisia and Egypt in 2010 and 2011, people have seen what is possible, what they can achieve together. Combined with better access to the internet and to devices such as smartphones, it makes people mobile and allows them to speak up. Before there was no space at all to exercise our democratic rights.”

“In 2010, the Coalition of Cambodian Apparel Workers Democratic Union (C.CAWDU) organised a nationwide strike to demand an increase of the salaries, which are way too low to make a living. We supported the strike in the provinces. Many leaders were arrested and charged. CLEC in itself doesn't have much power to protect workers, so we work with the Clean Clothes Campaign and our other international friends to gain the power to fight these unlawful charges. In the end, in one of the factories the management dropped all charges against the trade union leaders there.”


Tola hopes that CLEC's international friends will continue to support their work.
“People in Europe are key in helping to spread the news and support the workers in Cambodia, whether it's about wages, malnutrition or union-busting.”