A broad coalition of unions, worker centres, NGOs and other advocates have come together to develop and advance a proposal for a legally binding and enforceable wage agreement in order to achieve Living Wages as standard in the Global Garment Industry. 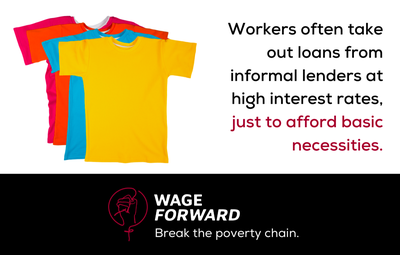 Asia Floor Wage Alliance (AFWA), Clean Clothes Campaign (CCC) and the Worker-driven Social Responsibility Network (WSRN) launched a website today that sets out a concrete proposal for an enforceable, binding agreement between global brands and unions on the payment of living wages to garment workers. The groups represent a broad coalition of unions, advocacy groups and NGOs and have received tremendous support from other allies across the globe. By launching this public website all actors can provide input and suggestions, and engage in discussions as well as offer support and endorsement.

“It’s about time that a credible proposal is made in which brands are truly held accountable for the dreadful circumstances under which workers and their families have been living for decades while they, the brands, were making gigantic profits. Brands’ CSR reports are full of promises regarding wages. Now it’s time for them to put their money where their mouth is,” remarked Anannya Bhattacharjee, president of the Garment and Allied Workers Union.

Brands are the primary profit accumulators in the garment supply chain, dictating what prices are being paid while barely abiding by minimum wage standards. Because of the extremely low prices brands pay for labour, most workers are forced to work overtime hours in order to make ends just meet. Voluntary brand or multi-stakeholder initiatives have thus far failed miserably to address this core issue of the garment industry and not led to any wage increases for workers and certainly not to payment of a living wage.

WageForward.org highlights the important benefits of the Enforceable Brand Agreements (EBA) and Worker-driven Social Responsibility (WSR) approach. Just as the Accord on Fire and Building Safety in Bangladesh and the Fair Food Program have dramatically improved the safety and living conditions of supply chain workers, EBAs within the garment industry hold real promise for addressing the crises caused by poverty wages.

Iwan Kusmawan, Head of International Department, National Leadership SPN said, “Industry stakeholders are busy talking about what a ‘just recovery’ from the Covid-19 crisis would look like. An enforceable brand agreement on living wages must certainly be part of that.”

The central element of the proposal is the payment of a living wage contribution on every order signatory brands place with any supplier. This contribution directly goes to workers. The contribution is largely based on the gap between statutory minimum wages and estimated living wages. Unions in many production countries have set concrete living wage demands and a regional living wage formulation, the Asia Floor Wage, was developed by a group of trade unions in Asia who demanded that brands pay this gap. Analysis of these and other credible living wage benchmarks confirms that wages on average need to triple. The calculation of the living wage contribution then factors in variations per country as well as wage increases reached through collective bargaining and translate this into a percentage to be added to the price paid by the brand. The proposed agreement will also include strong protections for workers’ right to organize and the guaranteed access to a 24-hour complaint mechanism to report violations to the agreement. Grassroots unions, brands and labor rights groups will be signatories to the agreement and signatory brands will be required to terminate business with suppliers that violates the agreement. If they don’t, they will face legal action as the agreement is legally-binding.

WageForward.org has launched during a time in which many workers’ main concern has shifted from the lack of payment of a living wage to sometimes a lack of any payment whatsoever. The Covid-19 pandemic has hit the sector brutally hard: hundreds of thousands of garment workers are owed billions of dollars.

Ineke Zeldenrust, International Coordinator of the Clean Clothes Campaign said, “Brands’ behaviour during the pandemic has once again shown us the complete ruthlessness of brands towards the people making the products they are selling. Workers are bearing the brunt of this crisis. Their wages are deferred or simply not paid. This happened on a massive scale since March and is unfortunately still ongoing.”

“The fact that these workers have been paid poverty wages all along means that they do not have savings to fall back on. Had they been paid a living wage over the past couple of years, it would have been a very different, less ugly picture,” Theresa Haas, Director of Transnational Strategies, Worker-driven Social Responsibility Network.

WageForward.org highlights how immediate action is required from brands to ensure workers receive full wages and benefits, including severance, during the pandemic. Proposals have been developed for an Enforceable Severance Guarantee Fund, a Wage Assurance and a Supply-Chain Relief Contribution. The remedy for workers’ immediate needs must be combined with these types of enforceable measures in order to prevent future human rights violations in the global garment industry.