On Human Rights Day 2021, CCC South East Asia Coalition has issued this statement, standing in solidarity withgarment workers and all those in the South East Asia region fighting for their human rights, freedom and democracy. 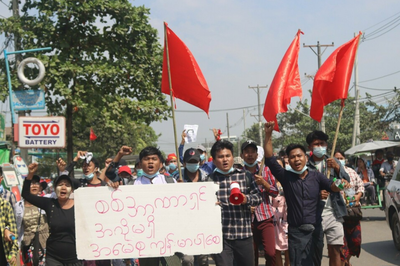 The Clean Clothes Campaign South East Asia Coalition, composed of 32 organizations supporting garment factory workers in the region, stands in solidarity with all garment workers and with everyone in the South East Asia region fighting for their human rights, freedom and democracy.

In Myanmar, the military junta has brutally violated human rights, targeting workers, activists, labour rights organisations and trade unionists in their attempt to wipe out opposition. To date, this has led 7640 people being arrested, charged or sentenced by the junta, and 1299 people have been killed.

Similarly, other countries in South East Asia are experiencing an upsurge in autocratic leadership which has resulted in the shrinking of civic space and the undermining of the labour movement in these countries. Leaders and members of the labour movement are being targeted and face intimidation, ranging from increased and obstructive bureaucracy to outright threats of violence and imprisonment.

Shrinking civic space in South East Asia helps those in power at the expense of workers by limiting their ability to organise and restricting their fundamental human right to freedom of association. Effectively, shrinking civic space lowers labour standards and puts workers at greater risk. Since the onset of the pandemic, we have seen Covid-19 related policies used to rollback past victories made by the labour movement, and as an excuse to further violate labour and human rights. This includes factory closures without severance pay, wage cuts, mass layoffs, and union busting under the guise of necessary Covid-19 response, all while simultaneously limiting the space for workers to seek redress.

CCC South East Asia Coalition stands in solidarity with all those fighting for basic labour rights, resisting autocratic leaders and fighting against the rising authoritarianism in the region.

We urge nations and states to abide by their obligation to protect both the economic, social and cultural rights—including labour rights—and civil and political rights of its people under the Universal Declaration of Human Rights, proclaimed 73 years go today, December 10th.

We demand that brands, who stand to benefit from lax labour laws and shrinking civic space, stand by their codes of conduct and actively protect workers' rights throughout their supply chain.

As we honour the bravery of Myanmar's garment workers and people, and the labour and human rights activists in Cambodia, Thailand, Indonesia and the Philippines, we pledge our commitment to work together and to pressure brands sourcing from these countries to prioritise workers’ rights, and other actors in the region to exert their powers for good and to make these struggles known globally.