Statement of solidarity with workers from Sindh province, Pakistan

Garment workers, trade unions and labour rights organisations of the Sindh province in Pakistan are fighting to receive the 40% increase to the minimum wage that they are legally entitled to. 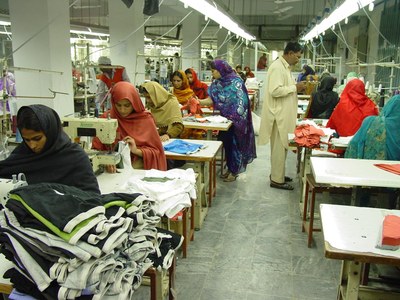 The Clean Clothes Campaign (CCC) network stands in solidarity with the garment workers, trade unions and labour rights organisations of the Sindh province in Pakistan, as they fight to receive the increase to the minimum wage that they are legally entitled to.

The Sindh province is one of Pakistan’s main garment-producing hubs. On 9th July, the Sindh provincial government announced a 40% increase to the minimum wage, raising it from 17,000 rupees to 25,000 rupees (approx. €124 EUR). On the surface, this represents a major victory for workers, who have been struggling to survive on poverty wages that fall far short of the rising costs of living. However, this win has yet to play out in reality as factory owners fight against it and brands stand by and do little to protect workers’ rights.

Employers, arguing that they can’t meet the costs associated with a higher minimum wage, launched an appeal to the Supreme Court in an attempt to cancel the order, and in October the Court ruled that the provincial government should conduct a review. No official ruling has been made yet and the final judgement is expected in January, however an interim order has been issued by the Supreme Court this week, stating that employers must pay arrears to workers, at between 19,000-20,000 rupees per month.

Thus far, the majority of factory owners have refused to pay the increased wage, using the appeal as an excuse, and are threatening to pull production from the Sindh province and move their businesses to the Punjab province, where the minimum wage remains low.

Global brands, including H&M, C&A, Aldi Nord, Fruit of the Loom, Bestseller, Levi’s, Gap and Adidas, source from the Sindh province. They have the power to embed this progress, to abide by the commitments made in their own codes of conduct, and to put action behind their promises to work towards a living wage in the industry. These are brands who profess to support living wage initiatives yet they have been suspiciously silent, even though the struggle of Sindh’s workers has been public knowledge for months. Brands could easily cover the 40% increase to the minimum wage without any noticeable dip to their profits, and their lack of action will undermine this vital step and condemn workers to vulnerability, poverty and debt. “On a salary of 17,500 rupees it is impossible to even feed one’s family. We can’t even pay the rent or utility bills,” said Saeed Ahmed, Denim Clothing factory worker.

CCC calls for all brands sourcing from the Sindh province to:

The workers of the Sindh province can’t survive on empty CSR rhetoric, the time for action is now.