Last week, according to reports, at least 8 people died and 29 were injured when a ten story building housing a garment factory collapsed on them in the early morning. Clean Clothes Campaign offers condolences to the victims and their family and calls for an international binding agreement on factory safety that holds brands, retailers, and factory owners accountable. 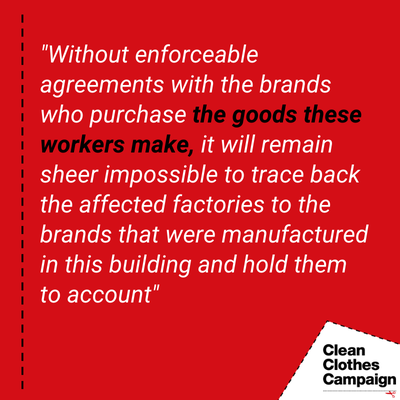 The tragedy follows a building safety incident less than three weeks earlier, also near Obour City in the east of Cairo.  This report from Roya News says eyewitnesses revealed that cracks appeared in the building two days before the collapse, and some of its residents left, while the vast majority remained because of the lack of alternative housing. The workers of the garment factory housed in the building all slept inside. After the collapse, the report says, the Cairo governorate formed a committee to investigate the cause of the incident.

“Without enforceable agreements with the brands who purchase the goods these workers make, it will remain sheer impossible to trace back the affected factories to the brands that were manufactured in this building and hold them to account. The voluntary initiatives of the past have given us ample examples of failure: if brands truly want justice for the people making their clothes there needs to be greater transparency and legally binding agreements that make factories safer,” says Ineke Zeldenrust. “In absence of that, we are again asking people to go through the rubble in search for labels to establish which brands need to take responsibility.”

The tragedy shows the need for concerted efforts in the industry to improve factory safety and healthy workplace conditions. The collapse of the Rana Plaza building in Bangladesh in 2013, killing over 1,100 workers, led to a binding and enforceable system that has improved factory safety for over 2 million workers in that country. Currently, unions and labour rights organisations are calling for this programme to turn into an international binding agreement, that could be used to implement and enforce the same levels of health and safety in garment supply chains in other countries around the world.

Clean Clothes Campaign calls upon the brands and retailers who sourced from the two factories in Egypt where workers were killed in the past month, to provide full and fair compensation to the families who lost loved ones and injured workers. Furthermore, it is urgently needed for brands and retailers to negotiate and join a legally binding agreement on health and safety in the workplace, to ensure that the programme in Bangladesh remains binding and to open up the opportunity to cover other garment producing countries such as Egypt.