Today, Clean Clothes Campaign launches a public tracker showing which garment brands are advocates of a new strong binding agreement on factory safety and which major brands are an obstacle to progress in the field of worker safety. The tracker calls out major companies such as H&M and Bestseller (Vero Moda, Jack & Jones) for not using their considerable power to ensure that advances on supply chain factory safety are maintained. 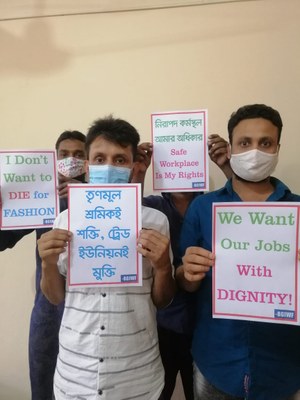 The Accord on Fire and Building Safety is a groundbreaking safety initiative, established in response to the Rana Plaza collapse of 2013. The programme has made factories safer for over two million Bangladeshi garment workers thanks to its strong legal enforceability, transparency, and independent oversight mechanism. Eight years since the programme's start, however, the binding contract between brands and unions that enshrines brands’ legal accountability is about to run out. Negotiations between representatives of the unions and brands that have signed the Accord failed to reach a conclusion before the end of the legal agreement on 31 May 2021. A last minute three month extension offered some respite, but four weeks before the new deadline of 31 August there is still no new agreement in sight.

Amin Amirul Haque, president of the National Garment Workers Federation in Bangladesh, said: “The Bangladesh Accord has shown that it has the elements needed to bring real change to garment factories in Bangladesh. Why does it take so long for brands to agree on a new safety agreement that safeguards a system that has prevented many workers‘ deaths and injuries over the past eight years? A legally binding agreement is needed to ensure workers’ rights are respected.”

This is why Clean Clothes Campaign (CCC) reached out to brands and retailers in the Bangladesh Accord to urge them to commit to the main elements of a strong new binding agreement, to show that not all brands and retailers are happy about the delay in reaching a new safety agreement. Eleven apparel companies, including ASOS, UNIQLO, and Esprit, answered that they are eager to sign a new agreement that is legally binding upon individual companies, has independent oversight, and can be expanded to other countries.

In their responses, many brands have become more outspoken about the need for individual brand accountability and independent oversight than in previous communication, but failed to speak out about the global nature of a new agreement. The Clean Clothes Campaign network believes that the expansion of the Accord model to other countries is an indispensable part of a new agreement: “It is crucial that the new safety agreement has a global scope. Eight years since the Rana Plaza collapse, the safety situation in many factories beyond Bangladesh remains unaddressed. It is time that workers in supplier factories in other countries have access to the same inspections, trainings, and complaint mechanism that have made a difference to workers in Bangladesh,” said Nasir Mansoor, president of the Pakistani National Trade Union Federation, who has been advocating for a binding safety mechanism in Pakistan for many years.

Even if CCC believes that the time is over to be contented with limiting this programme to Bangladesh, we welcome the increased support among brands for individual brand accountability and independent oversight, as long as these match or exceed those of the current Accord and apply equally to all brands participating in the safety programme in order not to create double standards.

The brands that the tracker identifies as the barriers to progress on factory safety are those that, despite having the power to make a difference in the process towards a new agreement, have failed to do so. All these companies have considerable power in the process, because they have over 75 supplier factories in Bangladesh and/or are directly representing other brands at the negotiation table. Only brands that have agreed to all elements that are crucial for a new life-saving agreement and are not in a direct position to change the course of events, are identified on the positive side of the tracker. All brands that have decisive power and have not used this in the past months to ensure a new agreement is ready to be signed, are identified on the negative side. We hope these major brands and all other signatory brands will use the upcoming weeks well to ensure that a strong new agreement is signed.

Christie Miedema, Campaign Coordinator at Clean Clothes Campaign, said: “Companies that have failed to push for a new safety agreement are bargaining over workers’ lives. And also the silent majority of smaller Accord signatory brands and brands that produce in Bangladesh and have failed to sign the Accord at all carry responsibility. Any garment brand that sources from Bangladesh and is not actively speaking out in favour of a strong binding agreement on factory safety is showing disregard towards workers’ lives. Brands can make this right by quickly negotiating and signing a strong new agreement in the coming weeks. We are hopeful many brands will sign such an agreement as they have signed the temporary extension after 31 May.”

The brand tracker is available here.

s.Oliver was added to the positive side of the tracker shortly after the launch on 4 August 2021.