Joint statement of solidarity with workers in Myanmar 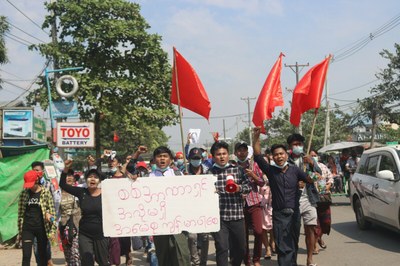 We, the undersigned global networks and organisations stand in solidarity with trade unions, the labour rights movement and the people of Myanmar in condemning the military coup, calling for the restoration of democracy, respect for the rule of law and the immediate release of all those unlawfully arrested since the coup.

Since the 1st of February, when the military coup took place, the people of Myanmar have been bravely taking to the street in rallies, strikes and noisy protests to show their resistance to the military take-over. Workers across economic sectors, including many garment workers, are joining the protests and the Civil Disobedience Movement (CDM), exercising their fundamental rights to go on strike and demonstrate. Trade unions and human rights organisations in Myanmar and abroad oppose the military coup and are calling for international solidarity in the fight to restore democracy.

Garment companies operating and sourcing in Myanmar need to show solidarity with workers and support CDM and the courageous workers who are fighting for their rights and for democracy in Myanmar.

We urge all garment manufacturers, brands and retailers active in Myanmar to:

1. Publicly condemn the military coup, call for the restoration of democracy and the rule of law, and to support the people’s protests and the Civil Disobedience Movement;
2. Ensure their business activities do not contribute to or aggravate human rights violations and are not directly linked to the military. Brands and retailers sourcing in Myanmar need to exercise human rights due diligence with their suppliers and on their whole supply chain to ensure these principles are respected. Garment companies must continue to identify, document, address and remediate human rights abuses and risks in the garment sector in Myanmar.
3. Protect and support the labour rights movement, including trade union federations, factory-level unions, labour rights organisations and workers in defending Myanmar democracy. Brands and retailers must condemn the military’s announcement declaring illegal labour rights organisations and prohibiting them to continue their activities. They must also voice and show their support for freedom of association and ensure their direct and indirect suppliers respect these principles.
4. Protect and support workers who are exercising their fundamental rights of freedom of expression, peaceful assembly, freedom of association and right to strike. This means that:

(a) Garment companies should ensure that no worker, union leader or union member is punished or faces disciplinary measures for going on strike or joining demonstrations.
(b) Workers who miss work, either due to security and political reasons or for having exercised their fundamental rights to strike and protest, should not face punishment or disciplinary measures.
(c) Garment companies should ensure the job security and wage payments of striking or protesting workers, as well as of those workers who cannot come to work due to safety concerns.

5. Brands and retailers, as well as improvement initiatives (such as multi-stakeholder initiatives or responsible business initiatives) focusing on the garment industry, must act promptly in response to complaints or information they receive regarding human and labour rights violations occurring in factories where they, or their members, source from. In that context, companies should actively engage with Myanmar and international trade unions and labour organisations.
6. To facilitate the identification of risks and the resolution of complaints and human rights violations, brands and retailers should disclose an up-to-date list of all their direct and indirect suppliers in Myanmar, including the name, address, parent company, type of product and number of workers.

We call on garment brands, retailers and manufacturers to make these commitments public, to share them with their direct and indirect suppliers in Myanmar and with relevant business partners.

We urge improvement initiatives to publicly commit to these recommendations, to share them with their members and to closely monitor their corporate members to ensure they fulfill their obligations to respect human rights.

Clean Clothes Campaign, the Global network consisting of 237 NGOs and trade unions active in 45 countries and working through 4 regional coalitions.