CCC's stance on the ongoing situation in Myanmar. 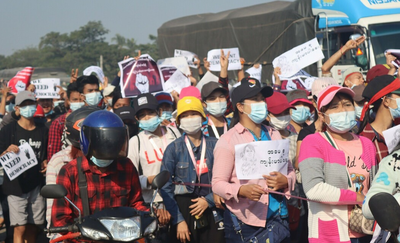 The situation regarding human and labour rights in Myanmar has continued to deteriorate since the military junta coup in February. The military has brutally violated human rights and, in their attempt to wipe out opposition, targeted workers, activists, labour rights organisations and trade unionists. As a result, Clean Clothes Campaignmembers in Myanmar have been forced into hiding. As of September 18th, 1109 people have been killed by the military since the coup and 6613 are currently detained in custody.

We stand in solidarity with all those working to end military rule in Myanmar and fully support the call to bring back democracy and to respect human rights. The Clean Clothes Campaign’s role is to amplify the voices of garment workers and to be guided by the demands of our members regarding protection of their rights. Having consulted with our Myanmar members, we call for the suspension of the EU’s preferential trading system ‘Everything But Arms’ (EBA). Under the EBA, businesses in Myanmar can export goods tariff-free (barring weapons and ammunition) to the EU market. The EBA has significantly bolstered Myanmar’s economy and the EU receives more than half of Myanmar’s total apparel exports. EBA preferences can be revoked in cases of serious and systematic violations of human rights and suspension of it will hit the ruling military.

The Clean Clothes Campaign will continue to push all garment brands sourcing from Myanmar to prioritise workers’ rights in all their actions.

This means that brands who are stopping production in Myanmar must abide by their responsibilities to exit responsibly, honour all existing commitments and payments and ensure workers receive all wages, benefits and severance pay owed to them. This is vital as the coup, combined with Covid-19, have resulted in job losses, povertyand economic instability, which are severely impacting upon workers and their families. Myanmar has approximately 700,000 garment workers; brands must act now to ensure these workers and their families do not face further hardships.

Our demands to brands:

Our call to the European Union, the United Kingdom and international communities:

Our initial recommendations can be found on https://cleanclothes.org/news/2021/garment-brands-and-manufacturers-must-condemn-the-military-coup-and-support-workers-in-myanmar