On Wednesday, 26 May 2021, as Amazon holds its annual shareholder meeting, workers and trade unions across the world will take part in a global day of action in solidarity with workers in Amazon’s supply chain in Bangladesh and Cambodia. 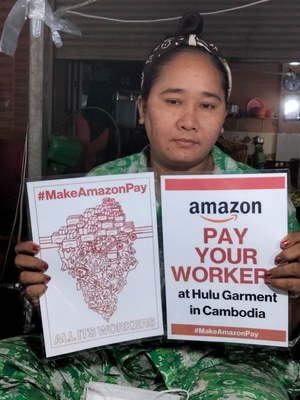 Hulu Garment workers are taking the lead in the campaign

Amazon, now the top fashion retailer in the United States, draws on an extensive network of some 1400 factories worldwide, including hundreds of garment factories. But despite record profits during the pandemic, Amazon is refusing to ensure laid off factory workers receive the severance pay they are owed, according to a recent  report  by the Worker Rights Consortium. Like warehouse and delivery workers, factory workers in the last concealed part of Amazon’s global system of exploitation are taking on the corporation.

In Bangladesh, unionised garment workers, laid off in October when Amazon’s supplier Global Garments closed, are demanding  the factory reopen, rehire the 1,200 union members, and provide them with back pay.

Rintu Barua, who had worked at the factory for 20 years as a quality checker and is now blacklisted due to his union activism, said: “The closure of the factory has taken away our means to survive. I’ve been trying to get a new job for over six months. But because I was a union leader at Global Garments, no one in the industry will hire me.”

In Cambodia, former workers at Amazon’s supplier Hulu Garment are calling on Amazon to ensure their full legally-owed severance. Hulu Garment suspended its entire workforce of 1,020 workers at the start of the pandemic in March 2020. At the end of the suspension period, workers were called to come in and sign a document with a thumbprint in order to receive their final wages. Workers signed the document, without realising that a sentence was hidden within the document to say that they were voluntarily resigning from their roles. Hulu Garment has withheld $3.6 million in severance pay owed to the workers.

Yi Sokunthea, who had worked at Hulu Garment for 15 years, said: “I have two children and elderly parents depending on me. I had to reduce my daily expenses by 50%. I needed to pull my children out of school for a while.”

While workers struggle with unpaid wages, union busting and poor working conditions, Amazon’s net profits shot up by 84% during 2020 over the pandemic, and it now has a net worth of US $314.9 billion.

Amazon workers, trade unions, and their supporters around the world are coming out in support of their fellow workers in Amazon’s supply chain in a show of unity between warehouse, delivery, and garment workers across borders.

The Make Amazon Pay campaign, a coalition of more than 50 groups co-convened by UNI Global Union and the Progressive International, and the Pay Your Workers coalition, endorsed by over 200 groups, have planned actions at Amazon sites in countries across five continents including in the UK, France, Germany, Belgium, Luxembourg, the Netherlands, Bangladesh, Switzerland, Australia, USA, Costa Rica, Colombia and Mexico.

Casper Gelderblom, the Progressive International’s coordinator for Make Amazon Pay, said: “Amazon is the most powerful corporation in the world, and its CEO Jeff Bezos is the richest man on the planet. This power and wealth depends entirely on the labor of hundreds of thousands of workers around the world. Workers make the product you buy, package it for you, and deliver it to your doorstep. Workers, not Bezos, make Amazon’s world run.

“Around the world, the workers producing Amazon’s profits are standing up to claim their rights. Across its supply chain, Amazon refuses to pay workers the respect and wages they deserve. Loud and clear, Amazon’s producers, distributors, and delivery drivers are telling Jeff Bezos: pay your workers.”

Christy Hoffman, General Secretary of UNI Global Union, said: "Amazon must pay all its workers – wherever they reside, whatever their occupation. But ultimately, making Amazon pay is part of a much bigger fight to win another world. One in which global commercial circuits are geared not towards the wealth and power of billionaires and shareholders, but towards the health and happiness of the hard-working people who run it."