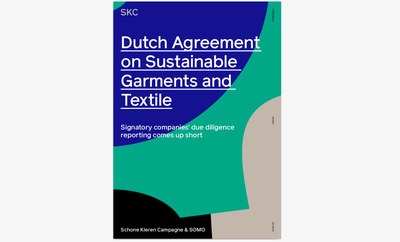 The Agreement on Sustainable Garments and Textile is part of a Dutch government system that aims to bring companies from one business sector together in order to examine how this sector can operate more sustainably across borders. The aim of the AGT is to prevent, mitigate and remedy human-rights violations, such as dangerous working conditions, trade-union busting, child labour, and poverty wages; all of which continue to be endemic in international garments and textile supply chains.

The Agreement also requires member companies to report about their due-diligence efforts. SKC and SOMO reviewed 34 of these reports and assessed the extent to which they correspond to internationally-agreed standards.

The analysis shows that almost all companies report on human rights risks at country level. Unfortunately, it turns out that only half of them address specific problems in the factories they work with. There is also a lack of concrete information about companies' actions to address problems in their supply chains. Most companies appear to have little or no dialogue with factory workers. The companies' reports reveal that AGT member companies take far too little action to explain to workers, unions, and other stakeholders how to access remedy and where they can go if they want to file a complaint. Finally, only a small number of companies are transparent about their production locations and provide factory names and addresses on their web sites.

“We were disappointed with these results,” said Willemijn Rooijmans, researcher at SKC. “Not one brand actually does it right. Essential elements of international corporate social responsibility are missing from these reports. ”

Lack of action towards freedom of association and a living wage

The Agreement aims to make progress on two important topics for the sector: freedom of association (the right to form workers' unions) in factories, and living wages. While the importance of these issues is widely recognised by companies, the research shows a lack of action on these two topics by the AGT member brands.

The Dutch government is currently evaluating its system of sectoral agreements and will soon draw conclusions about the measures to be taken. "There is not enough pressure behind this type of voluntary relationship to achieve results," said Willemijn Rooijmans. “We distinguish the same patterns in similar initiatives abroad. We would prefer to see legislation forcing companies to make real efforts to prevent and deal with human rights violations in their supply chains. Companies should also communicate about this publicly. Independent supervision and sanctions for companies that fail to carry our due diligence should be part of this legislation. Binding legislation is not only more effective, it is also fair because every company would be competing from the same starting point. ”

On June 17, a number of Dutch opposition parties submitted draft legislation which would increase mandatory corporate social responsibility in the Netherlands. SKC and SOMO welcome this initiative.

With the 2021 Dutch parliamentary elections approaching, SKC and SOMO are also calling on other political parties to determine their position on this kind of legislation, and to include clear language about this in their election programmes.

The full report can be consulted here.