Call on your local government to #EndUyghurForcedLabour and create stronger human rights due diligence legislation. Stop brands like Zara profiting from #ForcedLabourFashion. 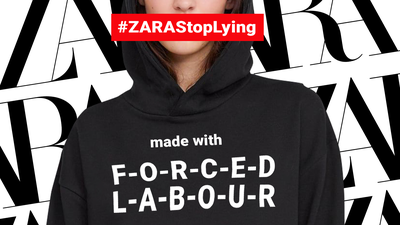 The United States has banned cotton imports from Xinjiang Production and Construction Corps (XPCC), one of China’s largest producers, citing Xinjiang 'slave labor'. The U.S. has stated that the Chinese quasi-military organisation uses the forced labour of detained Uyghur Muslims. The ban against XPCC, which produced here 30% of China's cotton in 2015 could have a sweeping effect on companies globally involved in selling textiles and apparel to the United States.

This is a very positive end to the last week which has seen activists and citizens calling Zara to stop profiting from #ForcedLabourFashion. Zara have admitted that though they do not have direct links with the Xinjiang region they are unaware if their supply chain is free of slave labour. You can still get involved with the call to action by calling out Zara on social media and sharing the Freedom United panel discussion on Uyghur forced labour. You can find more information about how to reach your local government representatives on the forced labour fashion website.

"#ForcedLabourFashion is woven, sewn, and packaged into the global fashion industry. Uyghur people have lost their freedom and lives, forced to produce your clothes. Don’t fall for @Zara’s well-tailored image. #CallOutZara to #EndUyghurForcedLabour www.ForcedLabourFashion.org" - Click to tweet!

The United Nations cites what it says are credible reports that at least 1 million Muslims held in camps have been put to work. China denies mistreating Uyghurs and says the camps are vocational training centers needed to fight extremism. This is the biggest detention of an ethno-religious group since World War II. Detainees are subject to military-style discipline, abused, tortured, and even killed. Survivors report being subjected to electrocution, waterboarding, repeated beatings, stress positions, and injections of unknown substances. Reports come in this week of Uyghur muslims being forced to eat pork.

We are part of 72 Uyghur rights groups and over 100 global civil society organisations and labour unions calling on apparel brands and retailers to stop profiting from forced labour perpetrated by the Chinese government. NGOs and other groups are welcome to sign on to endorse the call to action. You can read more about our campaign here.