Tesco and Starbucks take action in exploited Burmese migrant garment worker case, but where are Disney and NBC Universal?

26 Burmese migrant garment workers are legally-owed 3.46 million Thai baht (approx. $110,000) in compensation for the exploitation they suffered while making products for Disney, NBC Universal, Starbucks, and Tesco. They received only 1 million baht from the factory owner. Tesco has taken action and paid more than a quarter of the outstanding amount owed to the workers and Starbucks has committed to paying. Disney and NBC Universal have yet to pay up to ensure these workers receive all the money owed to them. 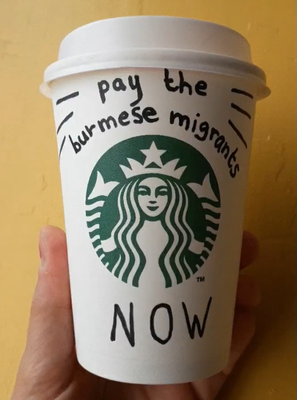 On November 4th, 26 Burmese garment workers from the Kanlayanee factory, based in the Mae Sot region of Thailand, returned to court in their third attempt to obtain justice for the abuse and exploitation they suffered while making products for four of the biggest global companies: Disney, NBC Universal, Starbucks and Tesco. They had been collectively awarded 3.46 million baht (approx. $110,000) in compensation by the courts over a year ago, yet had received nothing. The factory owner, Kanlayanee Ruengrit, offered only 1 million baht (approx. $33,000), just 30% of the total amount owed to the workers, as the maximum that she could pay. Facing immense pressure from the Thai courts, the workers agreed to accept the lower offer, having few other options. They are now calling on Disney and NBC Universal to follow Tesco and Starbucks’ lead and collectively pay the remaining amount.

The four brands whose products were being made at the Kanlayanee factory have a combined wealth of over $500 billion. Last week, Tesco stepped forward and paid 736,000 baht (approx. $24,000), more than a quarter of the outstanding amount owed to the workers. Tesco is the only brand to pay so far, however Starbucks has committed to paying 600,000 baht (approx. $20,000). The remaining two brands, Disney and NBC Universal, have yet to agree to pay up and fill the gap. These brands have a responsibility towards the workers who make their products and a clear moral obligation to pay. Tesco and Starbucks’ decision to act in this case is an important example of responsible corporate behaviour and reflects an emerging industry standard. Over the past five years, in cases where factory owners shirked their legal responsibility to provide wages and/or severance benefits to employees, an increasing number of international brands and retailers –including Nike, adidas, Disney, Fruit of the Loom, Hanesbrands, H&M, Walmart, and Jack Wolfskin – have taken active steps to ensure that workers received the compensation they were owed. Disney has played a positive role in other factory closure cases, and questions surround their lack of engagement in this case; a case that involves migrant workers, among the most vulnerable workers in supply chains.

Conditions in the Kanlayanee factory were harsh, and workers earned well below the minimum wage of 310 baht ($10.15), were not paid legally-required overtime or holiday pay, worked seven days per week in sweltering heat with no fans and few windows, in a factory where the toilets were too dirty to use. The exploitative conditions found in the Kanlanayee factory are worryingly common in the Mae Sot region of Thailand, near the border with Myanmar. Mae Sot is a hub for migrant workers, all 26 of the Kanlayanee workers are Burmese migrants, and a regulatory black hole where exploitation is rife and many factories operate without proper inspections. The unusual element in this case is that all four brands involved are global household names.

The Clean Clothes Campaign (CCC) and MAP Foundation have been supporting the garment workers in their ongoing struggle for justice since the factory closed suddenly in September 2019, following Starbucks pulling orders after a media expose made the abusive conditions public. The former Kanlayanee workers received nothing for over a year, during which time they have faced extreme hardship. Many have been unable to find new jobs, having been blacklisted, their names and photos sent to nearby factories. Covid-19 has made their circumstances bleaker, and only four of the 26 have been able to find regular jobs, the rest struggle daily, relying on borrowed money to survive. Some are forced to eat morning glory (water spinach) picked from the roadside as they cannot afford to buy food.

Disney and NBC Universal must act now and pay the remaining amount to ensure that these workers don’t face further unnecessary suffering. These brands have failed in their supply chain due diligence and they must now make these workers whole.

“We welcome Tesco's contribution and Starbucks commitment to pay and call on Disney and NBC Universal to follow their lead and take responsibility for the workers in their supply chain. This case exemplifies the urgent need for industry reform so that companies can be held legally accountable for their due diligence failures. Workers should not be the ones who pay the price. These brands must pay up now to ensure these workers receive the full amount owed to them," said Ilona Kelly, Urgent Appeals Coordinator for the Clean Clothes Campaign.

“These workers were exploited while making products and profits for some of the biggest companies in the world. We’re pleased that Tesco has paid and Starbucks has committed to paying, now action from Disney and NBC Universal is due. The former Kanlayanee workers deserve justice, they deserve the full amount they are owed and we expect these brands to uphold their responsibility and pay the remaining amount,” said Brahm Press, Director of MAP Foundation.

A petition calling for Disney and NBC Universal to pay up can be found here.