Tell Disney, Starbucks, and NBCUniversal they can write a happy ending for the story of 26 Burmese migrant workers in Thailand. These workers are legally owed approximately $110.000 USD, which is close to nothing for three of the biggest companies in the world, with a combined market value of $509.7 billion. Join us and sign the petition! 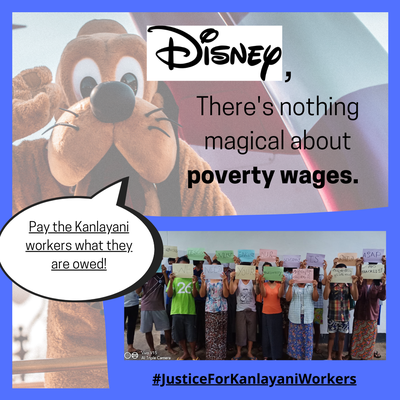 Sign our petition and tell these global brands they can’t just walk away. Together we prove the power of collective worker action and global solidarity to ensure justice, even in the darkest corners of the garment industry. Sign now!

There's no magic in poverty wages @Disney, @Starbucks and @NBCUniversal! Make sure the Kanlayani workers get the money they are owed after they bravely spoke out and lost their jobs while making your clothes and aprons. #JusticeForKanlayaniWorkers - http://ow.ly/6dju50C4Px4 - CLICK TO TWEET

Tell @Disney @Starbucks and @NBCUniversal to stop being the villain and pay up to the Burmese workers in Thailand making their textiles! They lost their job when speaking out on their poverty wages and Starbucks cut and run. #JusticeForKanlayaniWorkers ow.ly/lWJP50C5LiR - CLICK TO TWEET

Telll @Disney, @Starbucks and @NBCUniversal they can write a happy ending to the story and pay the Kanlayani workers, who made their clothes and aprons what they are legally entitled to. #JusticeForKanlayaniWorkers ow.ly/lWJP50C5LiR - CLICK TO TWEET 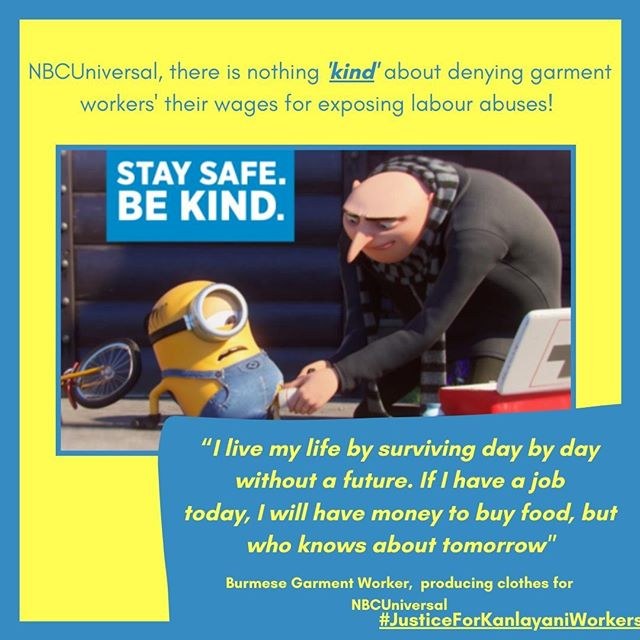 For two years a group of Burmese migrant workers were illegally paid less than a dollar an hour, were forced to work unpaid overtime, and had their holiday pay withheld at the Kanlayani factory in Mae Sot, Thailand. Last year, in Sept 2019, the Kanlayani workers bravely spoke out to stop the labour abuses. A few weeks later, the factory suddenly closed after Starbucks cut orders, leaving the workers with nothing. The former Kanlayani workers have been fighting for justice ever since; demanding that they receive the money they are legally owed for making products for four major global companies: Disney, Starbucks, NBCUniversal and Tesco. Tesco has stepped up and made a commitment to contribute towards the amount the Kanlayani workers are owed. What are Disney, Starbucks, and NBCUniversal waiting for?

Speaking out together, we can make these brands act so that the former Kanlayani workers receive the money they are owed, collectively around $110,000 USD (approximately 100.000 EUR). This money means everything to these workers. Since the closure of the Kanlayani factory, they have been blacklisted for speaking out. The former Kanlayani workers barely have enough money for food, and have had to pick morning glory from the the side of the streets to have something to eat.

A post shared by Clean Clothes Campaign (@cleanclothescampaign) on Oct 7, 2020 at 6:44am PDT

Tell Starbucks, Disney and NBCUniversal they have a responsibility to ensure workers’ rights are respected in their supply chains. They must ensure the Kanlayani workers receive all the money they are owed for making their products. The Mae Sot region of Thailand is known to be 'a black hole' in the Thai garment industry, where labour rights violations are common place, and factories routinely take advantage of visa dependent migrant workers. If the Kanlayani workers win, this can set an important precedent for the future – that brands can’t just walk away, proving the power of collective worker action and global solidarity to ensure justice, even in the darkest corners of the garment industry.