Preventing violence and harassment against women at work is vital in a time of crisis. CCC calls on the European Council to ratify ILO C190 to protect women from gender based violence. 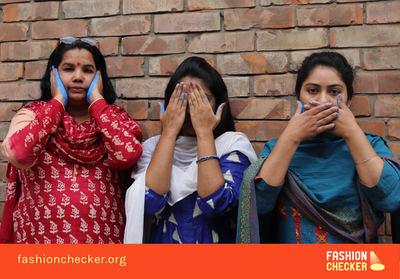 Gender-based violence and harassment affecting women and girls around the world and has increased tremendously with the onset of the corona crisis. Women are particularly at risk, especially in informal and low-wage sectors such as the garment and textile industry. There are concrete solutions to counteract this. The Clean Clothes Campaign (CCC) has published a position paper that – again – proves the urgency of taking action against violence at work by looking at the example of garment factories.

November 25th is International Day for the Elimination of Violence against Women. Between this date and human-rights day on December 10th, the yearly “16-days campaign” global action runs. This year’s theme is violence against women in the workplace and in the informal economy. This year the campaign emphasizes the need for countries worldwide to urgently ratify ILO Resolution 190 and adopt domestic legislation in order to prevent work-place related violence.

In their recent policy paper on wages and gender-based violence, FEMNET and Clean Clothes Campaign call on companies and politicians to implement appropriate measures for preventing and mitigating violence at work. Necessary steps include the abolition of exploitative purchasing practices that force women workers into economic dependency and the access to complaints mechanisms for victims.

The Policy paper “Wages and Gender-Based Violence” is a part of the Clean Clothes Campaign Fashion Checker project. Fashion Checker puts a spotlight on the discrepancy between what brands say they do and the reality for workers in their supply chains with a focus on gender pay-gaps, gender-based violence, living wages and transparency.

The vast majority of EU countries are in favour of ratifying Convention 190. However, this must be implemented at EU level, for which the consent of all member states in the Council of the EU is necessary, which some countries have denied so far. EU Member States must therefore act all the more decisively in order to pave the way for strong international and national regulations against violence towards women and sexual harassment in the workplace.

“Women and girls are exposed to particularly high risks in international supply chains. The ILO Convention 190 provides, among other things, rules on preventing gender-based violence and providing support to victims. The Council of the EU must take the initiative now to enable member states to ratify the ILO Convention as soon as possible. Global supply chains must not be carried out on the backs of women and girls”, says Renate Künast, member of the German parliament.

Internationally, too, it is time to exert pressure and promote ratification: The CCC is supporting the #RatifyILO190 campaign on November 25, the day against violence against women – together with partners from production countries around the globe.

“Violence against women and girls has to stop now.” says Sina Marx from Femnet and the German CCC.