Out of the shadows: A spotlight on exploitation in the fashion industry.

Our new report brings data from the Fashion Checker transparency tool to life, detailing the stark contrast between fashion brands' big claims, and the reality of their supply chains. 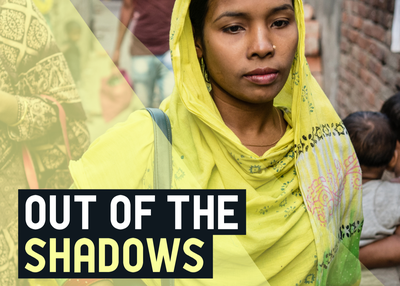 At the midpoint of the "Big Four" fashion weeks, "Out of the shadows" shines a light on the poor work practices and poverty wages of the garment sector. The report found that despite their sweeping promises, none of the surveyed brands can prove that all workers in their supply chain earn a living wage.

This report details the research behind the transparency tool: Fashion Checker which was launched in June of this year.

Whilst the brand research itself shows that no brand pays a living wage to all workers in their supply chain, the field research brings to life the poor work practices that are hidden behind the numbers.

Worker interviews and evidence from payslips show that poverty wages continue to be a systemic problem in the garment industry, often hidden deep within complex and secretive supply chains. The failure of brands to pay living wages is intrinsically linked to a lack of transparency. Whilst brands make grand promises of sustainability and ethical production, behind the scenes they wield immense power to pick and choose between low-wage economies.

The field research reveals the struggle that workers face, in order to earn poverty wages. Despite excessive overtime of over 100 hours a month, only two workers earned an amount equal to living wage, in effect working two jobs each.

Wage breakdown is often given to workers in complex formats, making it difficult for workers to understand their wages, or challenge pay inaccuracies. For workers in India and Indonesia, the information on payslips is so unreliable that many workers do not even know how what they receive relates to what is on their payslip.

In an industry predominantly powered by a women’s labour, the research also highlights gender discrimination in wages. For instance, in India women earn on average only 88% of what men wages. In our company survey, not a single brand surveyed provided evidence or public information on overall gender pay gaps in its supply chain.

The data revealed in the ‘Out of the Shadows’ report reinforces the need for brands and governments to take urgent action and meet the demands set out by the Clean Clothes Campaign on the Fashion Checker website to increase transparency, and use living wage benchmarks to implement living wages throughout the industry.

Filling the gap: A living wage through transparency

Fashion Checker is part of the Filling the gap campaign which aims to fill the gap between poverty wages and living wages, between male and female pay, and to fill the gap in data at the bottom of the supply chain. It involves 17 CCC partners from all over Europe (The Netherlands, Belgium, Germany, Austria, Croatia, Finland, Italy, Poland, Czech Republic, Hungary, Sweden) as well as partners from Indonesia, China and India.