Case highlights the vulnerability of workers in subcontracted factories. NCP failure to clarify relationship between brand, main supplier and subcontractor leaves way open for brands to deny responsibility for workers in their supply chain, and a lack of transparency in adidas’ due diligence processes leaves Freedom of association violations unchallenged. 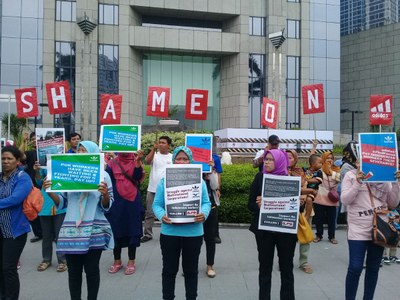 The Clean Clothes Campaign (CCC), the Indonesian labour law organisation LIPS, and the German SUEDWIND-Institute, express disappointment in the German National Contact Point (NCP) of the OECD’s handling of a complaint they lodged regarding labour violations in clothing brand adidas’ supply chain.

The complaint, accepted by the NCP in 2018, concerned wage and freedom of association violations at a subcontracting factory, PT Panarub Dwikarya (PDK), in Indonesia. The NCP’s decision to close the case without resolution is disappointing as patterns of union busting have not been adequately dealt with nor has adidas’ failure to carry out suitable risk management. In a clear case of trade union discrimination, several union members were dismissed from PDK in February 2012, followed by the dismissal of 1,300 workers in July 2012 who took part in a strike demanding the minimum wage, back pay and their freedom of association rights. Adidas refute that the dismissals were violations of freedom of association rights and, by not giving its own assessment on the case, the NCP have let adidas’ version of events stand.

In their final statement, the NCP fail to acknowledge the established business relationship between one of adidas’ main Indonesian shoe suppliers, Panarub, and the subcontracted factory, PDK. Substantial evidence indicates Panarub is the parent company of PDK, including shared management personnel between the two factories. This is a vital point. Adidas is a major and ongoing buyer from the parent company and therefore has significant power and influence over both factories. Adidas deny any responsibility for workers during the events of July 2012, stating their production at PDK ended in May 2012. This not only diminishes the influence they have due to their ongoing relationship with Panarub, it also ignores events that occurred during their production which led to the strike.

Throughout the complaints procedure adidas has not been forthcoming regarding its due diligence processes and the NCP has not demanded further cooperation. This lack of transparency puts workers’ rights at risk and makes it challenging for NGOs to offer tailored recommendations on better risk management for future cases of suspected trade union discrimination.

“It is disappointing that the NCP views its own role solely as that of a mediator, rather than a body able to uphold the OECD’s Due Diligence Guidelines and pass its own assessment on specific cases where brands have failed to uphold these Guidelines. We expected a firmer stance to be taken by the NCP,” said Dr Sabine Ferenschild of SUEDWIND-Institute.

Dina Septi of LIPS said: “This case highlights the extreme vulnerability of workers in subcontracted factories and raises the question of what happens in cases of labour violations if brands are allowed to deny responsibility towards them? Workers deserve more.”

“Serious concerns over adidas’ due diligence have been ignored in this instance. The inadequate response from the NCP allows brands to hide from their responsibilities and puts workers in dangerous situations,” said Tessel Pauli of CCC.