Eight years since a fire in a Pakistani garment factory killed over 250 workers, their families are still fighting for recognition and justice from the companies responsible. On this day, our thoughts are with the affected families and their struggle for justice. Now, the Italian auditing company RINA has a unique chance to step up to make up for mistakes made in the past. 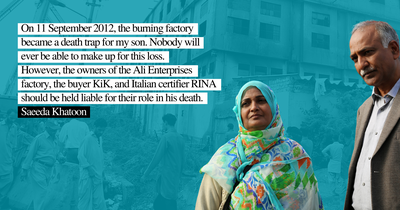 On 11 September 2012, when a fire broke out in the Ali Enterprises factory in Karachi, many  workers had no chance of escaping. A computer simulation of the fire by the research group Forensic Architecture shows that the factory was manifestly unsafe. A correct implementation of Pakistani and international safety regulations could have saved many lives. However, neither the factory owners nor the main client, German retailer KiK, had an incentive to improve the factory safety as the factory was certified as safe according to the Social Accountability International SA8000 standard by Italian auditing company RINA. This certification was extended just weeks before the deadly fire.

The prevailing social auditing system, with RINA as its executor, failed to protect the workers of this specific factory in Karachi, as it has failed so many workers in factories before and since. The auditing system makes profits on the basis companies’ need to show that they are doing “something” in the field of workplace monitoring and thereby protects companies rather than actually changing working conditions for the better. Legal systems have so far failed to hold auditing firms accountable for their deadly reassurances.

In 2018, families affected by the Ali Enterprises factory fire, together with a coalition of Pakistani and European trade unions and NGOs, filed a complaint against RINA to the Organisation for Economic Co-operation and Development (OECD) National Contact Point (NCP) at the Ministry for Economic Development in Rome. RINA should observe the OECD Guidelines for Multinational Enterprises. In line with these guidelines, the complainants have urged RINA to publish the original audit report and provide remedy and an apology to the families. The complainants call upon RINA to use this moment, while the announcement of the outcome of the procedure is still pending, to make up for its mistakes of the past and start bringing some form of justice to the families.

“The burning factory became a death trap for my son. Nobody will ever be able to make up for this loss. However, the owners of the Ali Enterprises Factory, KiK as a buyer, and Italian certifier RINA should accept their responsibility and admit their wrongdoings for their role in his death,“ said Saeeda Khatoon, president of the Ali Enterprises Factory Fire Affectees Association.

The Ali Enterprises families fought for over four years to receive some form of long-term financial compensation from the factory’s main buyer – German discount retailer KiK. An attempt to hold the company also legally accountable in German court however failed, as has an attempt to hold RINA accountable in Italian court. It is therefore high time that multinational companies are held legally accountable for their behaviour in their supply chains, including attention for factory safety which is still very much lacking in Pakistan up to this day. This could be through mandatory human rights due diligence as proposed by EU Commissioner Didier Reynders or the supply chain legislation as discussed in Germany, as well as through regulation bringing legal liability of social auditing firms.