How Inditex usurps the word ‘Respect’

The fashion giant Inditex, which owns the brand Zara, presents itself as a transparent company that attaches the utmost importance to the people who produce its clothes. Exclusive investigation into the conditions in which one of its iconic hoodies was produced reveals what goes on behind the scenes: meagre wages, excessive hours, precarious contracts. The workers pay the price for the huge pressure to drive down prices that Inditex exerts on its suppliers in order to boost its handsome profits. 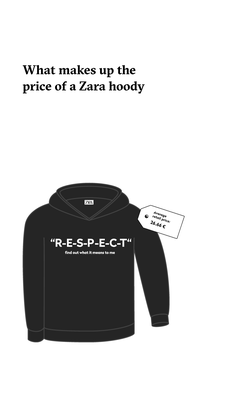 To put Inditex’s nice words to the test, Public Eye scrutinised a hoody from Zara’s ‘Join Life’ collection – Inditex’s flagship ‘sustainability’ line. The hoody bears a promising slogan: ‘R-E-S-P-E-C-T: find out what it means to me’, referencing Aretha Franklin’s song. Public Eye was persistent in its efforts to follow this item of clothing down the supply chain, all the way to the factories of Izmir, Turkey. The field research highlighted the huge pressure that Inditex exerts on suppliers to drive down prices: the factory tasked with producing the 20,000 hoodies – sold for CHF 45.90 in Switzerland/EUR 29.95 in France – was only paid nine Turkish lira per item (1.53 euros) and the firm that printed the slogan on the hoody was paid only 9 cents per print. To make ends meet, factory owners are forced to pay their staff less than they should, or to make them work more.

According to information gathered by Public Eye, workers would earn 2,000-2,500 Turkish lira per month (310-390 euros), namely a third of what the Clean Clothes Campaign estimates would be needed for a living wage (6,130 lira). Nevertheless, Inditex’s code of conduct states that its suppliers should pay salaries that are “enough to meet at least the basic needs of workers and their families and any other which might be considered as reasonable additional needs.” One of the factories would work around the clock, divided into only two shifts. This would mean their staff must work 12 hours at night, a practice which contravenes both Inditex’s code of conduct and Turkish law, which stipulates that night work should not exceed 7.5 hours. Public Eye further understands that many of the workers in one of the factories would be employed on day contracts, with no guarantee of having more work the following day. Nearly everyone we spoke to refused to be quoted for fear of losing their supply contracts or jobs.

Given that fast fashion’s number one firm does not disclose any data on supplier wages or the purchase prices it pays, we produced our own detailed calculation of the breakdown of the price of the hoody. We worked in collaboration with Éthique sur l’étiquette, Schone Kleren Campagne, and the French research bureau BASIC. According to our calculations, Inditex makes 4.20 euros per hoody, which is approx. twice as much as all the people involved its production earn (2.08 euros) – from the cotton fields in India, to the spinning mill in Kayseri in central Turkey, to the factories in Izmir. There is an alternative to paying meagre wages: only 3.62 euros more per article would need to go to the workers to guarantee a living wage for all the people involved in production. Inditex, which made a record net profit of EUR 3.44 billion in 2018, should start respecting the rights of the people who contribute to its success by finally starting to pay purchase prices that guarantee them a living wage.

Read more here about the calculations.