Laws Needed to Ensure Companies Adopt Human Rights Practices -- Clothing and footwear brands and retailers have dramatically increased their disclosure of information about their supply chains in the past three years, a coalition of unions, human rights groups, and labour rights advocates said in a joint report released today. In 2016, the coalition created the Transparency Pledge, a minimum standard of supply chain transparency that enables advocates, workers, and consumers to find out where a brand’s products are made. 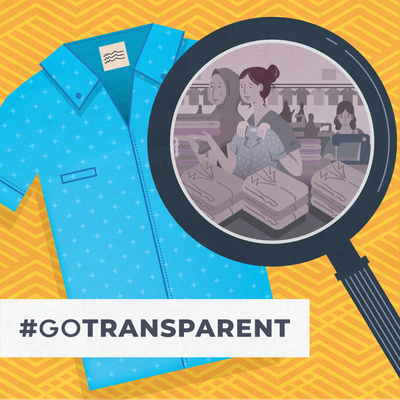 The 15-page report, “Fashion’s Next Trend: Accelerating Supply Chain Transparency in the Garment and Footwear Industry,” describes how dozens of brands and retailers are publicly disclosing information about their supplier factories. This has become a widely accepted step toward better identifying and addressing labour abuses in garment supply chains.

“Transparency is not a panacea for labour rights abuses but is critical for a business that describes itself as ethical and sustainable,” said Aruna Kashyap, senior women’s rights counsel at Human Rights Watch. “All brands should adopt supply chain transparency, but ultimately laws are needed that require transparency and enforce critical human rights practices.”

Supplier transparency is a powerful tool that promotes corporate accountability for garment workers’ rights in global supply chains. It is proof that a company knows where its products are made and also allows workers and labour and human rights advocates to alert the company to rights abuses in supplier factories. Information about brands’ supplier factories can help workers gain faster access to redress for human rights abuses.

Voluntary corporate action is limited, the coalition said. More effective would be the passage of national laws that require companies to conduct human rights due diligence in their supply chains, including public disclosure of at least the factories they are using.

Since mid-2018, the coalition has also engaged with seven Responsible Business Initiatives (RBIs) – groups of companies and others seeking to drive ethical business practices by their corporate members to promote supply chain transparency through their policies and actions.

Transparency among corporate members of RBIs varies significantly, the coalition said. By not mandating public disclosure of supplier factories by all their members, these initiatives reinforce the status quo in the industry. The coalition urged RBIs to play a leadership role by requiring companies, as a condition of membership, to publicly disclose information about their supply chains by January 2020, at minimum, in alignment with the Transparency Pledge standard.

“Responsible Business Initiatives should stop making excuses for companies that want to continue to keep their supply chains opaque,” said Christie Miedema, campaigns coordinator for the Clean Clothes Campaign. “They should instead follow the lead of the front runners among their members and make transparency a membership requirement to give workers and activists access to the information they need to help address workplace abuses.”

The United States-based Fair Labor Association, an RBI, has taken significant steps to drive supply chain transparency among its members. In November, it announced a requirement that all of its member brands and retailers must publicly disclose supply chain information, aligned with the Transparency Pledge standard, and make the information available in accessible open data formats by March 31, 2022. The Fair Labor Association estimates over 50 brands and retailers will be required to follow this new policy and, from April 2022, may be subject to a special board review if they do not comply.

The Dutch Agreement on Sustainable Garments and Textiles (AGT) has not made supply chain transparency of individual members a condition of membership but requires its members to disclose information about their supplier factories to the AGT secretariat that is made public in aggregate form through the Open Apparel Registry. The Open Apparel Registry is an easily accessible and searchable database that provides information about factories’ affiliation to brands and RBIs.

“Governments have an important role in adopting legislation requiring companies to conduct human rights due diligence in their global supply chains and being transparent about where their products are being made, said Bob Jeffcott, policy analyst at the Maquila Solidarity Network. “Such legislation is key to creating a level playing field among businesses and in protecting the rights of workers in their supply chains.”