Between 2 and 7 April, two Indonesian garment factory workers, who made Uniqlo clothing for years, will be in Copenhagen as part of the global PayUp Uniqlo campaign. 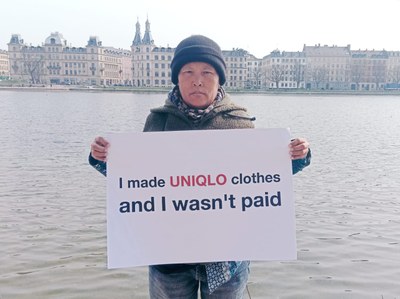 They demand that the brand fulfills the debt owed to workers following the unexpected closure of their factory in 2015. The workers’ visit coincides with the opening of the first Uniqlo store in Denmark on April 5th where CEO Tadashi Yanai is expected to attend.

Supporters are asked to leave message on Uniqlo's facebook page. Evidence retrieved from the factory confirms that Uniqlo was a major buyer of the Jaba Garmindo factory in Indonesia, which closed shortly after the brand began pulling orders with no warning or explanation to the workers. The founder and CEO of Uniqlo’s parent company, Tadashi Yanai, has an estimated net worth of $19.3 billion, making him the second-richest man in Japan. Uniqlo now generates billions of dollars in profits for its shareholders, but yet continues to refuse to pay the small pittance that is owed to the former Jaba Garmindo workers, many now destitute and living in extreme poverty. More information an be found on the Pay Up Uniqlo campaign page.

Supported by a global coalition of labour groups, the former Jaba Garmindo workers have campaigned against Uniqlo’s wage theft, since the closure of their factory. 2000 workers who sewed a variety of Uniqlo clothes including sweaters and vest are still owed 40 million kroner (5.5 M EUR) in severance. Wage theft has become standard operating procedure in the garment industry. Brands do not pay enough for their products to ensure workers receive living wages and mandated severance, leaving workers with nothing when factories close, often unexpectedly and with little notice, such as the case of the Jaba Garmindo factory.

Uniqlo’s sponsorships, such as with Dfunk in Copenhagen, are increasingly under scrutiny, as the brand seeks to build a positive image that can beguile consumers, while obfuscating labour abuses in their supply chain. The PayUp Uniqlo Campaign is urging institutions and organisations to refuse any form of collaboration or sponsorship with Uniqlo until the brand commits to end its wage theft practices, beginning with fulfilling the debt owed to the former Jaba Garmindo workers. Earlier this month a Spanish NGO refused a Uniqlo sponsorship citing that it would violate the organisation’s ethics policy due to the wage-theft against the former Jaba Garmindo workers.

You can also leave a message and join the campaign in support of Warni and Yayat.

Tell UNIQLO: pay the debt owed to workers who made your clothes

The CEO of Uniqlo wants the world to believe that his clothing brand UNIQLO is different from most global fashion brands - that UNIQLO is special, unique, and sustainable. But how can you be sustainable if you don't pay the people making your clothes?

Uniqlo is refusing to pay workers who made their clothes in Indonesia after the sudden closure of their factory.

This week the CEO is opening his next store in Copenhagen and two workers, who made Uniqlo clothes for years, will be there. We support them, will you join us and show Uniqlo that you can't call yourself 'green' if you don't take care of the people making your beautiul clothes?

Write to Uniqlo here and tell the CEO Tadashi Yanai that he can take his responsibility and pay the debt he owes the workers.

In 2014, Uniqlo and other major buyers withdrew orders from the Jaba Garmindo factory, without warning or explanation to the thousands of workers employed there. Just months after Uniqlo’s orders ended the factory fell into bankruptcy and the workers at the Jaba Garmindo factory - 80% of whom are women - went from having a reliable source of income to being left jobless and fighting for their livelihoods. Even worse, the money they are legally owed in unpaid wages and severance pay – amounting to at least $5.5 million USD - continues to be denied to them. These workers earned this money over many years of working long hours to produce clothes for Uniqlo and other brands. Some women worked for over a decade at the factory. To deny them their payment now is tantamount to wage theft.

Uniqlo is one of the fastest growing clothing brands in the world, generating billions of dollars in profits for its shareholders and owners and opening big stores around the world. Uniqlo’s founder and CEO, Tadashi Yanai, has built up his own personal wealth to an estimated $16 billion, making him the second richest man in Japan and among the richest in the world. Uniqlo can easily pay off the debt to these workers – workers whose labour helped build this fortune.

Write to Uniqlo here and tell the CEO Tadashi Yanai that he can take his responsibility and pay the debt he owes them.

The Jaba Garmindo workers have been fighting tirelessly and courageously over the past 3 years and now want our support in their fight against Uniqlo’s wage theft.

"Contribute to society' is part of the Yanai doctrine. But that is clearly not what the CEO is doing.

Previously the women, supported by international NGO's and workers coalitions worldwide, have pressed Uniqlo to live up to the United Nations Guiding Principles on Business and Human Rights which clearly state that it is the responsibility of internationally operating companies to ensure that human rights are respected throughout their supply chains.

Many of UNIQLO’s closest competitors have taken such action in similar cases. Nike, adidas, Disney, Fruit of the Loom, Hanesbrands, H&M, and Walmart have all taken active steps to ensure that workers received wages and severance payments owed when supplier factories went bankrupt, by either directly provided the funds owed to workers themselves, or pressing their supply chain partners (factory owners, buying agents, etc.) to do so, so that the workers received the sums that they were due under law. It took these brands years to contribute, and only after severe public pressure from the workers and consumers. Tell Uniqlo to stop dragging on the struggle of the women, tell them to pay what they owe.

Write to Uniqlo here and tell the CEO Tadashi Yanai that he can take his responsibility and pay the debt he owes them.