Hearing in KiK case before Regional Court in Germany

by christie — last modified 2018-11-29 13:49
“My son has paid with his life for the profits of KiK. Finally, a German court is looking into the case.” For claimant Saeeda Khatoon, the first hearing in the proceedings against German clothing retailer KiK in front of the Dortmund Regional Court is an important step – regardless of its outcome. Her son died in the fire that broke out in the Ali Enterprises factory – a KiK supplier – on 11 September 2012 in Karachi (Pakistan). “For 258 people the factory became a death trap. Nobody will be able to make up for this loss. But those responsible should at least be held liable. KiK was the factory’s main customer and therefore bears some of the responsibility for the inadequate fire safety measures.” 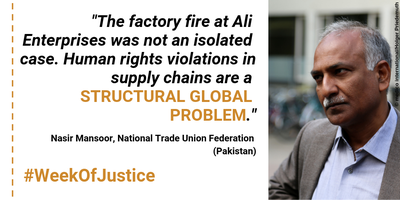 On behalf of the Ali Enterprises Factory Fire Affectees Association (AEFFAA), the organization of survivors and those bereaved by the factory fire, Khatoon and three other affected persons took their case to court in March 2015. The claim – which was initiated by the European Center for Constitutional and Human Rights (ECCHR) and is supported by medico international – is the first of its kind in Germany. The case should make clear that transnational corporations are responsible for the working conditions at their subsidiaries and suppliers abroad.

“Those affected want clarity and liability. We carry out this legal fight together with AEFFAA – against the factory owner in Pakistan, against the certification company in Italy and against KiK in Germany,” says Miriam Saage-Maaß from ECCHR. Lawyer Remo Klinger, who represents the Pakistani plaintiffs, fears that the question of corporate responsibility could remain unresolved. “KiK is trying to evade its responsibility by pointing to a possible statutory limitation and thus blocking the resolution of important questions of liability.”

Thomas Seibert from medico international adds: “Now it’s the politicians’ turn: the time for voluntary commitments from companies is over. We need laws for the enforcement of human and labor rights.” From an international perspective, Ben Vanpeperstraete from Clean Clothes Campaign makes clear: “The proceedings against KiK in Germany have contributed significantly to the compensation settlement.” The compensation was negotiated by the International Labour Organization parallel to the litigation in Germany.