by mirjam — last modified 2018-12-03 10:00
On 14 November 2018, Uniqlo walked away from a mediation process in Jakarta without making any substantial offer to former union representatives of the Jaba Garmindo factory, which went bankrupt in 2015 as a result of Uniqlo´s predatory purchasing practices. Following the unexpected factory closure, four thousand workers, mostly women, found themselves in huge debts and without prospects of employment 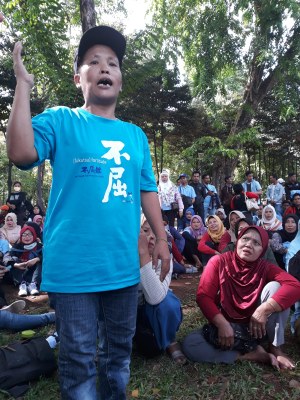 Clean Clothes Campaign is staging an international campaign since summer to push Uniqlo to contribute to the legally owed severance payments. All Uniqlo store openings in Europe received campaigners telling the public about the workers in Indonesia. In October, these European actions were followed by a speaker tour in Tokyo, the company's head quarters. After years of refusal, this pushed Uniqlo to finally meet the workers in Jakarta two weeks ago.

In April 2014, a year prior to the closure of the Jaba Garmindo factory, Uniqlo was contacted by labour rights activists following reports of labour violations at the factory. These violations included unlawful termination of pregnant workers, unpaid overtime, health and safety hazards, and trade union harassment. Around this time, Uniqlo stated it decided to withdraw production from the factory as a result of ‘quality issues’. Beginning in January 2015, workers were no longer being paid their full wages on time. Three months later the factory unexpectedly closed, declaring bankruptcy in April 2015, leaving 4000 workers unemployed and owed millions in unpaid wages and severance payments.

The same year the factory declared bankruptcy, Uniqlo reported a 10.3% growth in operating profits. Uniqlo´s operating profits have steadily increased each year, with a reported growth in August this year of 38.1 %. CEO Tadashi Yanai is the richest man in Japan and among the richest in the world, with his wealth nearly doubling in the past two years since April 2016 to $25.4 billion.

Uniqlo misrepresented their intent to come to a resolution during this mediation meeting with the former Jaba Garmindo union.  Prior to the meeting, Uniqlo representatives indicated their willingness ¨to reach agreement during the meeting on other ways [Uniqlo] can support workers,” in addition to their previous unsubstantiated offer to facilitate re-employment. In response, the workers said their needs could be addressed through the establishment of a humanitarian fund and requested that Uniqlo consider making a substantial contribution. However during the meeting, Uniqlo not only refused to consider making a contribution to such a fund, they also did not offer any additional proposals of support beyond their prior empty offer to facilitate reemployment, thus showing a clear lack of good faith.

Outside the building where the mediation meeting occurred, more than two hundred workers waited for hours in extreme heat in anticipation of some type of resolution.  The workers´ representatives repeatedly emphasized why a substantial contribution to a humanitarian fund is the only meaningful way that Uniqlo can adequately offer them support given the significant financial and psychological burdens imposed on thousands of workers and their families following the factory closure.  In response, Uniqlo reiterated that they are not legally obligated to fulfill the debt to workers following the factory closure and refused to attend a second meeting.

Recognised by industry insiders as a shark, only concerned with profits, Uniqlo´s continued refusal to fulfill the outstanding severance debt of $5.5 million owed to the former Jaba Garmindo workers either through a direct settlement or through a charitable donation is in violation of international standards and Uniqlo´s own codes of conduct.

Uniqlo executives do not dispute the facts of this case and the existence of on-going human rights violations in the form of owed severance payments.  Uniqlo continues to refuse to provide any remedy to the former Jaba Garmindo workers citing that it is simply not the company’s legal obligation to do so.  However, the UN Guiding Principles on Business and Human Rights (UNGPs) were established to address the pervasive problem of global companies like Uniqlo outsourcing production in order to evade legal responsibility for the consequences of their business practices.

The UNGPs establishes that the responsibility of companies to ensure that human rights are respected in their supply chains ¨exists over and above compliance with national laws and regulations protecting human rights¨. Uniqlo’s code of conduct reinforces this responsibility stating that the company’s “requirements may exceed those requirements set out in local law in order to safeguard worker rights under applicable national and international labor and social security laws and regulations”1.

Teddy Senadi Putra, of labour union PUK SPAI FSPMI at PT Jaba Garmindo says: “Instead of coming with an offer of contribution towards the payments that we are legally owed, Uniqlo repeats their offer for re-employment. But we don’t get any specifics of where this factory is located and how many people can be re-employed. And there can be no talk of re-employment without recognition that we are owed 5.5 million USD. With each garment we knitted and sewed together, we contributed to Uniqlo’s profit, which rose with 38% this year. Now we ask what we are legally owed and Uniqlo closes the door in our face.”

Mirjam van Heugten, international coordinator at Clean Clothes Campaign, an observer at the negotiation says: “Most of the women and men I met are middle aged; they were loyal employees, working at the factory for ten, twenty and sometimes more than thirty years. When factories close without paying severance payments, this amounts to wage theft and is a significant human rights abuse. The consequences for the workers are severe and long lasting. Brands, like Uniqlo, have a clear responsibility to provide remedy in all cases of wage theft, just as they have a clear responsibility to ensure that there is no child labourers or that women are not sexually harassed in the factories where their clothes are made.”

What the former Jaba Garmindo workers are demanding from Uniqlo is not new or unusual. In fact many of Uniqlo’s competitors have agreed to contribute to the payment of severance claims in cases where a supplier factory closed due to bankruptcy or other reasons. Nike, adidas, Disney, Fruit of the Loom, Hanesbrands, H&M, Walmart, and Jack Wolfskin have all taken active steps in previous cases to ensure that workers received compensation they were owed under law following a bankruptcy and factory closure.

Warni who worked at the Jaba Garmindo factory since 1992 says: “It was clear Uniqlo had a lot of influence over our factory’s business. When Uniqlo orders would come in, they bought new machines and made investments. We received high targets each day which meant many overtime hours. At times I sewed 900 sleeves in one day. We couldn’t even take toilet breaks. When my husband got very ill and had to go to hospital, I was refused to take my holidays to care for him and I lost him.”

Meanwhile Uniqlo is attempting to take over the European market. This fall, it opened stores in Stockholm and Amsterdam and Uniqlo has announced openings of more European stores next year, including Copenhagen and Milan. The parent company of Uniqlo, Fast Retailing will hold it’s AGM at the the end of this week, where the company is expected to boast record breaking profits.

Mirjam van Heugten says: “Uniqlo is desperate to be known as an important and influential player in the fashion industry. It wants to be Japan’s answer to Zara or H&M and it speaks of the promise of sustainability. However, sustainability brings with it an expectation of responsibility. Sustainability is not only about collecting plastic in the Amsterdam canals. It’s about making sure your supply chain is not hurting people’s livelihoods, and that the people who make your clothes can live lives of dignity.”