by christie — last modified 2019-09-02 14:32
Contributors: 13f11af8dd02495ebe4dcf89231e1fc9
More than 250 people died and dozens were injured in a fire at the Ali Enterprises textile factory in Karachi, Pakistan, on 11 September 2012. Only three weeks before, Italian auditor RINA Services S.p.A. certified the factory for abiding to international labour standards. Marking the six year anniversary of the disaster an international coalition of eight human rights, labour and consumer organizations file a complaint to the OECD National Contact Point (NCP) at the Ministry for Economic Development in Rome against RINA, the company that could have prevented hundreds of deaths by doing its work properly. 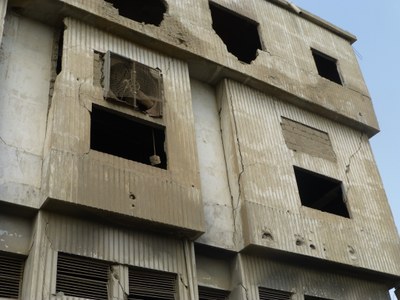 “My son died in the fire as hundreds of workers did because they were unable to flee the Ali Enterprises factory in time. There was no functioning fire detection system, firefighting tools and escape routes were blocked or not available,“ said Saeeda Khatoon, Chairwoman of the Ali Enterprises Factory Fire Affectees Association.

The high death toll of the Ali Enterprises factory fire demonstrates that the certification process ignored major safety issues. In a digital simulation of the fire, research agency Forensic Architecture, based at Goldsmiths, University of London, recently showed that if the factory‘s leniency on safety standards would have been identified and acted upon, hundreds of lives could have been saved.

Responsible for the audit and the certification was Italian company RINA, which not only failed to visit the factory itself, but whose Pakistani subsidiary RI&CA (Regional Inspection & Certification Agency) allegedly also did not set foot in the factory. This subcontractor’s audit failed to notice a range of infractions on the international standards it was upholding (SA 8000) and Pakistani safety standards regulations that would prove fatal, including an illegally constructed floor, and defunct fire alarm system, as well as the presence of child labour and structural excessive overtime. The auditing report even falsely claimed the presence of multiple, safe and freely available emergency routes and sufficient firefighting materials, whereas in reality doors were locked, routes were blocked and the only available fire extinguisher did not work.

Ben Vanpeperstraete, lobby and advocacy coordinator of Clean Clothes Campaign, said: “It is clear that RINA did a poor job by signing off on an auditing report which clearly failed to identify crucial safety risks and lulled the factory owners and the commissioners of the audit into a false sense of safety. RINA should have noticed the many risks at the factory and used the leverage of the SA 8000 certification to make sure the factory made improvements before it was certified.”

Deborah Lucchetti, coordinator of Campagna Abiti Puliti added: “RINA’s refusal to disclose relevant information in the name of confidentiality obligations has hampered the work of human rights advocates and external independent parties to establish the facts and speed up the remediation process. This case shows once again the need for full public transparency by removing any contractual barriers between the auditing company and its clients.”

RINA is a multinational enterprise located in OECD (Organisation for Economic Co-operation and Development) member country Italy and therefore should observe the OECD Guidelines for Multinational Enterprises. For this reason today, an international coalition of eight organizations from Pakistan, Germany, Italy and the Netherlands file a complaint at the Italian National Contact Point against RINA for issuing the SA8000 certificate on the basis of a deficient and incorrect audit report. The complainants urge that RINA publish the audit report of Ali Enterprises, ensure a more transparent audit procedure in the future which is accountable to workers. Furthermore, the complaint addresses two general flaws of the auditing system, urging that audits should take into account the context of brands’ purchasing practices and include a payment system that avoids the current conflict of interest raising from factory audits paid by factory owners. The complaint aims to show that the current system of audits legitimizes exploitation and creates false assurances that can cost lives and that therefore fundamental change is needed, in the field of transparency, accountability to workers and liability of auditing firms. Finally, the complaint asks that RINA also engages in the access and provision of remedy.

Carolijn Terwindt of European Center for Constitutional and Human Rights (ECCHR), which is a co-complainant of the case and is supporting Pakistani affectees in a civil claim against the main buyer of the factory, said: “RINA’s clear failure to detect and act upon safety and labour violations in the Ali Enterprises factory once more shows that the social auditing system is inherently flawed and that without transparency and accountability to workers the system is due to fail again and again.”

Alessandro Mostaccio, General Secretary of co-complainant Movimento Consumatori said: “The SA 8000 certification constitutes a guarantee for consumers worldwide to buy safe products. By certifying Ali Enterprises, RINA provided a misleading guarantee to consumers, putting an heavy shadow on the credibility of the whole certification system and its capacity to contribute to a safer and fairer industry. This violates the consumer’s fundamental right to safe products, as contemplated in the Italian Consumer Code, Art.2”

The failure of the auditing system shows the dire need for a credible preventive safety mechanisms in the garment industry that are geared towards building up state capacity instead of relying on parallel profit-based systems.

Nasir Mansoor of the National Trade Union Federation, Pakistan, (NTUF) said: “Workers and their representative unions should have a central role in monitoring preventive safety in Pakistan and demanding better working conditions throughout the industry as private auditing system failed miserably in improving working conditions.”

Karamat Ali, director of Pakistan Institute for Labour Education and Research (PILER), said: “Workers need to be able to come to work without fearing for their lives. A transparent and worker-inclusive preventive safety system will be needed to keep workers safe.”