Brands’ support for a living wage for garment workers in Bangladesh

by neva — last modified 2019-09-02 14:32
Contributors: 13f11af8dd02495ebe4dcf89231e1fc9
The Minimum Wage Board in Bangladesh will reconvene on Wednesday, 29 August, to set the new statutory minimum wage for workers in Bangladesh’s garment industry. Ahead of this meeting Clean Clothes Campaign, the International Labor Rights Forum and Maquila Solidarity Network jointly urged major brands sourcing from Bangladesh to publicly support workers’ demands. These include the minimum wage of 16,000 taka, a statutory framework to govern pay grades and promotion and other welfare measures. Inditex – the owner of Zara, Bershka, Pull and Bear and several other labels – was the first to publicly respond in a positive manner. 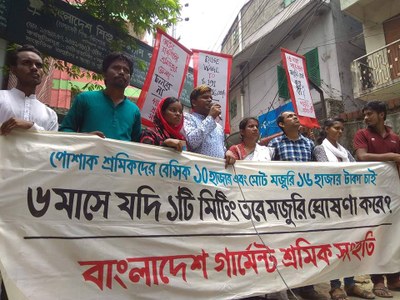 As the numerous public rallies over the past months have clearly demonstrated, the demand for 16,000 taka has broad and unified support of many trade unions, NGOs and labour rights groups, including the IndustriALL Bangladesh Council (IBC), which unites all the member unions of the global union federation IndustriALL. At a recent press conference Secretary General of IBC Salauddin Shapon said that, “Before formulating our demand for 16,000 BDT as minimum wage, the IBC conducted a study and carefully considered various aspects including cost of living, inflation trends and minimum wages in major countries that are producing readymade garments.”

Whereas brands previously only responded in direct correspondence, Inditex now published a statement on their website, in which they wrote: “We believe in the right of workers to a living wage, in Bangladesh and in all the markets from which we source. Therefore we expect the collective demands of workers, expressed through their legitimate unions including IndustriALL Bangladesh Council, to be taken into account, and the current negotiations used to reach agreement for a fair increase in the minimum wage that preserves the right of workers to a living wage.”

“We welcome this statement, and based on the responses received in the last few days we fully expect other leading brands to issue their own public statements in support of workers’ demands, or publicly support the statement made by Inditex,” said Ineke Zeldenrust from CCC.

In their non-public responses, a number of brands referred to the Bangladesh Accord on Fire and Building Safety and its successor, the Transitional Accord, as proof of their commitment to maintain their level of sourcing from Bangladesh.

Additionally, brands expressed commitment to fully respect and support the outcome of the wage negotiation process, and they referred to their membership in multistakeholder initiatives, including Fair Wear Foundation, Dutch Agreement on Sustainable Garments and Textile, and the German Partnership for Sustainable Textiles, which have all urged the Bangladeshi government to take the workers’ and unions’ collective demand into account, and highlighted the overall support for the payment of living wages.

“The proposal by Bangladeshi employers to raise the minimum wage by merely US$12 per month (from the current 5,300 taka to 6,360 taka) is an affront to garment workers and their families. Due to price inflation in the country since the previous wage increase in 2013 such a meager change would not even amount to an increase in real wages,” said Liana Foxvog of the International Labor Rights Forum.

“With major buyers like Inditex ready to support a living wage and urging that the collective demands of workers, expressed through their legitimate unions including IndustriALL Bangladesh Council, be taken into account in the current negotiations, the government and employers now have to come with a much better offer or risk alienating their main sourcing partners,” said Bob Jeffcott of Maquila Solidarity Network.

Beside the minimum wage increase to 16,000 taka, workers’ demands include the streamlining of the job grades that determine workers’ pay from seven to five; the introduction of currently inexistent promotion criteria; a 10 percent annual pay increase; and a shortening of apprenticeship periods to the maximum of three months, along with a wage increase for apprentices from 4,180 taka to 10,000 taka.

Clean Clothes Campaign, the International Labor Rights Forum and Maquila Solidarity Network call upon the Bangladeshi employers and public authorities to make sure those demands quickly materialize in the legal framework and on workers’ pay slips.

Ultimately, garment brands will benefit from this as well. They can expect better quality of the products they source from Bangladesh if workers are not hungry, in poor health and constantly worried about meeting their families’ basic needs, as is currently the case.