by christie — last modified 2019-09-02 14:35
Contributors: 13f11af8dd02495ebe4dcf89231e1fc9
Today, 1 June, the 2018 Transition Accord will take effect, working to make garment factories in Bangladesh safer. It will continue the work of its predecessor, which was established shortly after the deadly Rana Plaza collapse in 2013, to inspect factories and monitor renovations in a credible and transparent way. The new Accord has a range of new features, including the fact that it now welcomes producers of home textiles and fabric and knit accessories, next to garment factories. This means that more companies can join and more workers can be protected. However, IKEA, the largest home furnishing company in the world, has refused to bring the home textile factories it sources from in Bangladesh under the purview of the Accord. 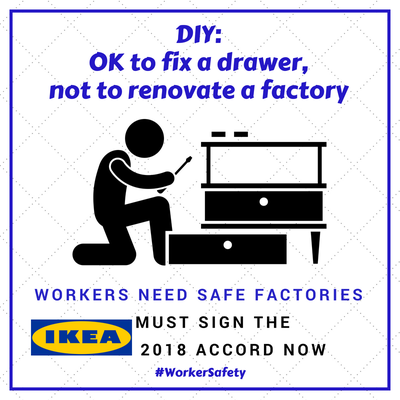 The 2018 Transition Accord is now signed by 175 garment and home textile companies, including some of the main companies sourcing from Bangladesh such as Primark, H&M, C&A and Aldi. This covers more than 1,300 factories and approximately two million workers. As the initial Bangladesh Accord was signed by over 220 garment companies, it means that there are still many companies sourcing from Bangladesh that have refused to take responsibility for the safety of the workers producing their garments, including Abercrombie & Fitch, Sean John Apparel and Edinburgh Woollen Mill. Other garment companies have never even signed the first Accord, either creating their own, less credible and binding alternative or sticking to completely voluntary measures. These companies, which include VF Corporation (The North Face), GAP, Walmart and many others, should soon take responsibility for worker safety as well and join the Accord. Companies can and should still join after the start of the 2018 Accord, as it is never too late to start protecting workers’ lives.

One of the new features of the 2018 Accord is that it also covers factories producing home textiles and fabric and knit accessories. In March therefore Future in Our Hands (FIOH), the organization that hosts Clean Clothes Campaign (CCC) in Norway, reached out to the country’s three main producers of home textile. While the two domestic companies Kid Interiør and Princess Gruppen answered favourably and signed the Accord, globally operating retail giant IKEA, originating from Sweden, refused to do so.

In communication with representatives of FIOH and CCC Norway, IKEA claimed that the company's own code of conduct, ‘the IKEA Way’ (IWAY), is sufficient to ensure safety at the company's suppliers. IKEA states that there are several ways to reach the goal of factory safety. Clean Clothes Campaign is however convinced that there actually is only one credible way towards safe factories in Bangladesh - and it is not IKEA’s way.

The Accord offers to only road towards safer factories in a country in which voluntary corporate social auditing systems has in the past failed to prevent the thousands of deaths of the Rana Plaza and Tazreen factory catastrophes. In response to that, the Accord is a collective scheme, that is a legally binding agreement between a great amount of brands and trade unions and contains extensive enforcement mechanisms. IWAY is no different from previous voluntary corporate auditing schemes: it is IKEA’s code of conduct, which is accountable to only the company itself. It lacks the transparency that makes the Accord credible and accountable; while the Accord publishes inspection and progress reports as well as lists of factories that have been terminated from the programme, IKEA makes none of this information public. This makes it impossible for outsiders to check whether IWAY is actually making factories safer. Moreover, while the Accord inspects all factories that signatory companies source from or sourced from in the recent past, IKEA only carries out audits in its main suppliers, expecting them to in turn check on their subcontractors. This suggests that IKEA wants to deflect responsibility from these suppliers and strongly decreases their possibility to oversee the process and be knowledgeable about working conditions in those factories.

IKEA claims to have has five main suppliers in Bangladesh. Research by FIOH reveals that only two of these suppliers in Bangladesh are covered by the Accord, meaning workers in the remaining factories are still at risk. Christie Miedema, campaign and public outreach coordinator at CCC: ‘At this specific supplier covered by the Accord IKEA is free riding the work of fellow companies that teamed up and put money and efforts into a collective scheme to make factories better. IKEA profits from its results without chipping in, and at the same time leaving workers at others suppliers inadequately protected.’

The Accord offers any company sourcing garment, home textile or fabric and knit accessories from Bangladesh an excellent opportunity to guarantee factory safety through a collective and transparent scheme that pools resources and has proven itself.

Says Christie Miedema: ‘IKEA, Abercrombie, VF Corporation and any other company that has thus far refrained from joining the Accord are doing themselves and their customers a disservice and are knowingly putting the lives of the workers producing for them at risk+ by sticking to opaque systems that so woefully failed in the past.’

Within three weeks after the Rana Plaza collapse a group of brands together with the Global Union Federations IndustriALL and UNI and eight Bangladeshi unions launched the Bangladesh Accord for Fire and Building Safety. While the programme started working from May 2013 on, apparel companies continued to sign on, and the signatory list eventually grew to over 220 corporate signatories. Key to its success are its enforcement system, which contains an escalation procedure for factories that fail to comply, and an arbitration process, that can be triggered by the worker representatives in the Accord against a company signatory. Two arbitration cases were settled at the end of 2017 and the beginning of 2018, the latter for an amount of 2.3 million USD.

The 2018 Accord is in several ways no exact duplicate of its predecessor. It not only has an extended scope but also expands its work on freedom of association and its training programme, now covering all factories and including freedom of association protections in relation to workers’ ability to stand up for their own safety. The 2018 Accord has a three year term and is called the ‘Transition’ Accord as it is meant to facilitate the transition to a public regulatory regime in Bangladesh. The eventual transition will not mean that from that moment on all responsibility for worker safety in Bangladesh rests on the shoulders of the government alone. Both factories and companies continue to carry responsibility for their workers and supply chain and will need to be held responsible for safety in the workplace and remedy to workers that suffer workplace injury.

A list of brands that did and did not sign the 2018 Accord is available here. Take action to convince more brands to sign on our action page.

Change note: Previously the article stated that IKEA sourced from only one Accord covered factory. However spelling differences between different lists initially obscured the fact that two factories are Accord covered, which is changed above.