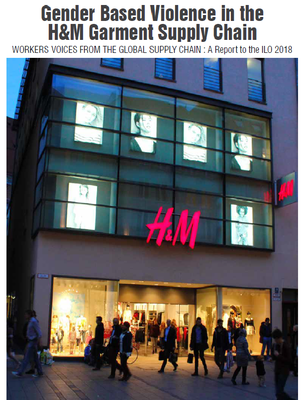 This new research documents sexual harassment and violence including physical violence, verbal abuse, coercion, threats and retaliation, and routine deprivations of liberty including forced overtime. The research also makes clear these are not isolated incidents; gender based violence in the H&M and Gap garment supply chains is a direct result of how these brands conduct business.

The H&M and Gap reports include an investigation of gender-based violence in H&M and Gap garment supplier factories, undertaken between January 2018 and May 2018 in nine garment production hubs across five countries in Asia: Bangladesh, Cambodia, Indonesia, India and Sri Lanka.

“My batch supervisor came up behind me as I was working on the sewing machine, yelling “you are not meeting your target production.” He pulled me out of the chair and I fell on the floor. He hit me, including on my breasts. He pulled me up and then pushed me to the floor again. He kicked me,” reminisced Radikha, who works at an H&M supplier factory in India.” Another worker, employed in a Gap supplier factory in Sri Lanka, said: “Supervisors require us to work in the night, but we do not get transport to go home. People from the factory take advantage of women in this position. We are harassed by men who wait outside the factory gates at night, especially younger women.”

After significant initiative from trade unions, the International Labour Organization (ILO) has convened to set international labor standards on gender based violence. Trade union leaders from around the world along with governments and businesses, are meeting now to begin the historic work of creating a global standard protecting women across sectors. These reports have been prepared to inform this dialogue. They aim to ensure that sure the experience and recommendations of low wage women workers in garment sector and supply chains are uplifted to create a strong framework for eliminating gender based violence in the workplace.

These are not isolated incidents; gender based violence in the H&M and Gap garment supply chains is a direct result of how these brands conduct business.

“Women workers and their labor organizations are uniting across borders to demand work that is free of gender based violence, pays a living wage, and promotes women’s initiative and leadership at all levels,” says Jennifer (JJ) Rosenbaum, U.S. Director of Global Labor Justice.  “Multinational corporations are expanding global supply chain models in many sectors. But it’s not only the corporations that are going global. Intersectional movements of workers, women, migrants and others are building global networks to demand change to a system that relies on poverty wages and gender based violence to deliver fast fashion to the U.S. and Europe at the expense of the well-being of women garment workers and their families.”

Tola Meun, Executive Director of CENTRAL, a Cambodian labour organization, described the violence documented in the report as a daily reality, “Gender based violence is a daily reality for women garment workers driven to meet unrealistic production targets in H&M and Gap’s supply chains. Most of these cases are not reported due to fear of retaliation in the workplace, including facing higher production targets or even being fired.”

“These findings from the research show that women workers need strong, independent trade unions to respond to gender based violence and the surveillance and retaliation that block many women workers from coming forward,” said Emaleia Yanti Sihaan, General Secretary of the Indonesia Federation of Independent Trade Unions (GSBI). “Women workers want an international labor standard eliminating gender based violence - and we also want core labor standards protecting freedom of association and collective bargaining to be enforced.”

These reports should ring alarm bells for all garment brands and are adding extra fuel to our “Turn Around, H&M!” campaign.

“These reports identify low wages as one of the risk factors for gender based violence. They should ring alarm bells for all garment brands and are adding extra fuel to our “Turn Around, H&M!” campaign. We are calling upon H&M to stop turning its back on the garment workers who were promised a living wage by 2018. They continue to live in poverty while H&M reports USD 2.6 billion profits. In less than one month, close to 100,000 people have added their voices to the demand for H&M to ensure without delay that workers are paid a living wage,” said Neva Nahtigal of Clean Clothes Campaign.