by mirjam — last modified 2018-09-04 08:33
Clean Clothes Campaign sends our solidarity to the Bravo workers, who have showed remarkable bravery and demonstrated an unwaivering commitment to the principles of fairness and justice. Following a period of sustained pressure from the brands involved, 140 Turkish garment workers have accepted partial payments towards the debt owed to them when the Bravo factory – which produced clothing for Zara, Mango (Inditex) and the UK brand Next – closed overnight in June 2016. Their struggle has played a vital role in highlighting an issue which affects thousands of garment workers worldwide and demonstrated the power and importance of solidarity between workers and consumers alike. 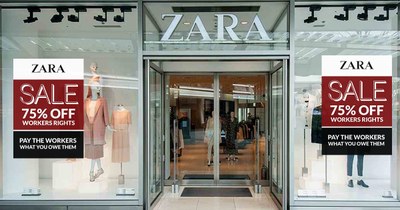 Following a period of sustained pressure from the brands involved, 140 Turkish garment workers have accepted partial payments towards the 2,739,281.30 Turkish Lira (now 545,346 EUR) owed to them. Over the last three weeks 140 workers who have been fighting to get their unpaid wages and legally owed severance have accepted partial payments towards the debt owed to them when the Bravo factory – which produced clothing for Zara, Mango (Inditex) and the UK brand Next – closed overnight in June 2016.

The workers have been fighting for the money they are owed since the closure; money they desperately need as result of years of low pay and their sudden and unexpected unemployment. Their campaign, which included leaving notes in the pockets of clothes sold in Zara, Next and Mango stores, received worldwide attention and more than 300,000 people supported their petition.

Since Christmas the workers have come under increasing pressure to take payments by brands, whose reputation has been damaged by the high profile and hard hitting campaign the workers had run. In the past weeks the trade union officials who  had bypassed the workers committee in negotiations told workers that a continued refusal to accept the low settlement from the brands would result in all offers of financial payment being withdrawn by the brands. Many workers, who were on the brink of losing everything say they felt like they could no longer take the risk of continuing the campaign. They added that the bypassing of the official workers committee representing the workers by the trade union was the final blow to their struggle for proper payment.

As a result, the Bravo workers agreed to accept payments from a "hardship fund" established by the brands, as an initial contribution toward the debt owed. They are clear that their acceptance of these payments in no way constitutes an agreement that this amount covers their legal due. They, along with the Clean Clothes Campaign continue to demand that until the full debts are paid Inditex, NEXT and Mango remain in breach of their obligations to remedy the human rights violations that took place at Bravo.

This amount paid into the fund by the brands was originally calculated on the basis that only certain blue collar workers would be provided with payments; the Bravo workers took a principled stand that all employees should be provided with the wages and severance owed, and refused to accept any money until all 140 employees, including supervisors, were covered by the scheme. Although the three brands ultimately agreed to the principle that the fund should be used to provide payments to all employees, they refused to increase the total, meaning the lower paid workers were expected to subsidize the newly agreed payments for higher paid supervisors and managers.

The brand’s decision to not increase the total money available, has meant the Fund did not contain sufficient money to pay out severance. As a result twenty workers have now been left with nothing and the lowest paid workers have received insignificant payments of around 5000 TL, while the highest paid managers, who took no part in the campaign, have received much larger payments of over 30,000 TL.

The Bravo workers are clear that it is the refusal of the brands to take responsibility for the fate of workers that has led to the current position. Last month, Inditex - the world’s largest clothes retailer, owned by Europe’s richest man - reported a 7% growth in profit, with sales over 25.34 billion euros. Yet it, along with two other major European brands, was unwilling to pay the extra 335.346 EUR needed to make all the workers whole. The other brands followed Inditex’s lead and chose to hold workers to ransom rather than negotiate with the Bravo workers directly for a fair deal.

The right to severance payments, in circumstances of mass terminations, which the Bravo workers continue to be denied, is recognized both within international labour conventions and under Turkish law. The risk that workers will be deprived of this right in cases of factory bankruptcy is well recognized. It is for this reason that multinational enterprises are expected to assess the risk that any withdrawal of business may have to ongoing operations of their supplier, and attempt to address potential negative aspects prior to withdrawal.

The Bravo campaign has demonstrated that consumers do care about what happens to those workers, who are forced into poverty as a result of wage theft and factory closures. In this case the brands decided to ignore their consumers and instead decided to starve out the workers, rather than negotiate. However, the campaign has placed the widespread problem of factory closures and the resulting wage and severance theft firmly on the agenda of the media and investors.

The Bravo case does not stand on its own. Factory closures are commonplace in the global garment industry and are often preceded by major buyers cutting off orders, without warning or explanation to the workers, most of them women. The consequences for workers and their families in each case are dire.

Clean Clothes Campaign believes that to deny these workers their payment is tantamount to wage theft and calls on all the brands involved to ensure these workers receive what they are owed.

International standards, like the UN Guiding Principles on Business and Human Rights, are crystal clear – brands retain full responsibility for their supply chains. Yet, big brands continue to deny their responsibility and offer ‘voluntary’ hardship payments that leave workers  locked out of the negotiating table and dependent on these handouts.

The Bravo case illustrates, one more time, the need to create an effective mechanism to protect worker’s rights and ensure remediation when worker’s rights are violated. The EU must promote legislation towards mandatory human rights due diligence on supply chains to avoid abuses to unprotected workers and put an end to voluntary and discretionary patches used by leading garment companies to limit their reputational risk. Brands must take immediate steps to ensure workers in their supply chain are protected should their suppliers go bankrupt, particularly when deciding to pull orders from the supplier.

Clean Clothes Campaign sends our solidarity to the Bravo workers, who have showed remarkable bravery and demonstrated an unwaivering commitment to the principles of fairness and justice. Their struggle has played a vital role in highlighting an issue which affects thousands of garment workers worldwide and demonstrated the power and importance of solidarity between workers and consumers alike.

We also wants to thank all our supporters for standing up for the workers in Turkey, and call on everyone to continue the fight against wage theft and severance. Together we know these brands can easily afford to pay us the relatively small amounts the workers earned and now need. Brands need to realize that with power comes responsibility: they need to recognise that the people who make their clothes have rights to be respected. Thank you for your support!