by christie — last modified 2019-09-02 14:38
Contributors: 13f11af8dd02495ebe4dcf89231e1fc9
The Clean Clothes Campaign is calling for the immediate release of seven trade union leaders from the Garment Workers Trade Union Centre in Bangladesh, detained last week on the basis of apparently false charges filed against them by the Bangladesh Garment Manufacturers and Exporters Association. 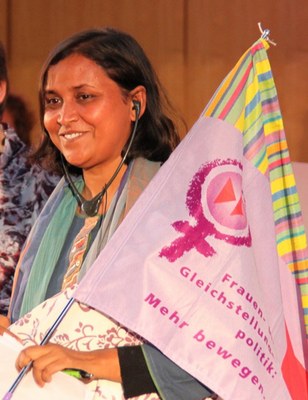 Joly Talukdar, KM Mintu, Monjur Moin, Jalal Howladar, Lutfar Rahman and Md Shahjahan, all leaders of the Garment Workers Trade Union Centre (GWTUC), and Sazedur Rahman Shameem, a leader of Communist Party of Bangladesh (CPB) were detained on 1 April after attending the court to request an extension to their bail. An eighth leader from GWTUC, Montu Ghosh was granted bail. On 5 April the High Court agreed to grant interim bail to all seven, but to date all remain in custody at Dhaka Central Jail.

The BGMEA filed the complaint following a protest by workers from the Asiana garment factory, which took place outside the BGMEA headquarters on 31 January. The workers claim they initially went to the building, along with a number of GWTUC leaders, after receiving a request to join a meeting with the owner of Asiana Garment to negotiate the payment of severance and unpaid wages owed following the sudden and indefinite closure of the factory. According to testimony taken from those who attended that day, around 450 workers arrived at the proposed time but were told by BGMEA security that no such meeting was scheduled. They were prevented from entering the building and decided to protest peacefully outside instead.

Workers report that BGMEA officials came out of the building and attempted to stop the protest by confiscating banners and microphones. Shortly thereafter, the workers report, a large number of men armed with iron rods and sticks appeared and began to violently attack the assembled workers; at least 20 workers were sufficiently injured to require hospital treatment. According to GWTUC, workers attempted to file a criminal complaint against their attackers at the local police station, but the police refused to take their statements.

Immediately after the attack the BGMEA filed a criminal complaint against twelve named persons – consisting of the majority of the GWTUC leadership - and 150 unnamed workers, accusing everyone of attempted murder and vandalism. On 4 February two workers were arrested and detained; they remain in prison.  Of the twelve leaders charged, only three were actually present at the Asiana protest; Joly Talukdar – GWTUC General Secretary and Montu Gosh – the president of GWTUC – were not even in Dhaka at the time of the alleged events.

Labour rights activists believe that these arrests are politically motivated and represent an attempt to silence the current campaign to increase the minimum wage for garment workers to 16,000BDT  (157 EUR) per month, noting that GWTUC have been one of the most vocal and active federations in this campaign. Bangladeshi workers earn some of the lowest wages in the industry, currently 5,300BDT (52 EUR); the last increase in the minimum wage was in September 2013.

The Clean Clothes Campaign wishes to express its solidarity with GWTUC and its leadership and strongly condemns this attack on an independent trade union, which is legitimately organising and campaigning for a much-needed increase in the Bangladesh minimum wage. It is concerning that the Bangladesh garment industry would once again choose to silence and imprison union activists and garment workers than take action to provide the decent living wage they are entitled to.

We call on the BGMEA to immediately withdraw these charges and to engage in genuine wage negotiations with workers and their trade union organisations.