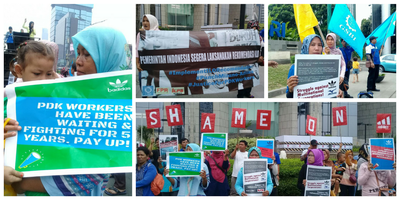 Clean Clothes Campaign (CCC) is preparing a complaint against Adidas to the German National Contact Point of the OECD for failing to provide access to remedy to 327 workers from their Indonesian shoe supplier Panarub.

In July 2012 2.000 workers of PT. Panarub Dwikarya (PDK), part of the Panarub Group, went on strike to demand the payment of the provincial sectoral wage, improving working conditions and the right to freedom of association. On 23 July 2012, 1,300 workers who participated in the strike were dismissed by the factory. Five years on 327 workers have not received their severance payment.

In October 2016 the ILO Committee on Freedom of Association concluded in its interim report that the dismissal of the PDK workers was unjustified and an abuse of the workers fundamental right to freedom of association, according to ILO standards.

In its complaint Clean Clothes Campaign urges Adidas to use its leverage over Panarub and demand to pay their former workers their severance. The NGO argues that Adidas has been directly linked to the workers’ rights abuse through its business relationship with Panarub and has contributed to it by condoning the refusal of its supplier to provide remedy for the PDK workers.

Clean Clothes Campaign argues that Adidas has violated the OECD Guidelines for Multinational Enterprises as well as the UN Guiding Principles on Business and Human Rights which state, that companies need to assess their human rights risks, carry out human rights due diligence and in the event of human rights abuses in their supply chain mitigate and provide access to remedy to rightsholders, in this case the PDK workers.

Adidas was well informed about the labour rights violations in 2012 that eventually forced the workers to strike. The leading sportswear brand chose to instruct its supplier to no longer produce its shoes at the contested factory; an action that failed to prevent further rights abuses from happening. Other actions conducted by Adidas after the 1,300 workers were dismissed, did not result in effective pressure on Panarub to provide remedy to the workers. Nevertheless, Adidas shoes have been produced at the PDK factory at the time the first union members have been dismissed (February 2012) and until shortly before the strike. Furthermore Adidas continues to do business with Panarub Group, the mother company of PDK.

Mirjam van Heugten from Clean Clothes Campaign says: ‘In the last five years Adidas has insufficiently used its leverage over one of its main shoe suppliers Panarub to provide workers with severance payments. As a direct consequence of this, workers have been evicted from their homes or had their children drop out of school because they could not pay the school fees anymore. One woman died after she could not afford her medication anymore due to her debts. Adidas has the leverage to make sure the women get what is legally owed to them, and their struggle can stop.’