Open letter: After five years, it is high time to pay severance to 345 workers who made adidas and Mizuno shoes

by christie — last modified 2017-07-12 15:10
Today five years ago, a group of Indonesian workers started a strike after their employer had denied them the provincial sectoral wage as well as freedom of association. By the end of July, 1,300 workers were dismissed for participating in the strike. Five years on, 345 workers are still fighting for their rightful severance pay. On this day, Clean Clothes Campaign published an open letter to adidas and Mizuno, the two brands that sourced from the factory in the years preceding these events. 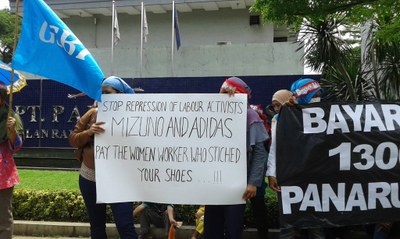 After five years, it is high time to pay severance to 345 workers who made adidas and Mizuno shoes

Five years ago today, more than 2,000 workers from the Indonesian PT Panarub Dwikarya (PDK) factory, part of the Panarub Group, went on strike to protest against their employer’s refusal to implement the provincial sectoral wage, the denial of their right to freedom of association and bad working conditions at the workplace. During the strike, the workers were confronted with police violence and intimidation. When the strike was over and workers tried to return to work, they reported being threatened and forced to quit their union. On the 23rd of July 2012, 1,300 workers who participated in the strike were dismissed by the factory.

Five years after the strike, your businesses are still operational and profitable. Adidas reported record sales and earnings in 20161 and Mizuno earned 59.2 billion Yen on footwear in 20162. The Panarub group remains one of your key suppliers in Indonesia. However, 345 ex-PDK workers are still fighting for a full severance package that will compensate them for being unfairly dismissed. Their termination had devastating impacts on their lives: some workers’ children had to leave school as they could not pay the tuition fee, some workers were evicted from their homes as they could not pay the rent and for others the economic stress of unemployment led to the breakdown of their marriages. Many workers were forced to accept work as contract workers or casual labourers in the formal and informal economies, employed on a daily basis or on temporary contracts. Some are in debt and others are blacklisted by companies because of their previous employment at PT Panarub Dwikarya.

Both your companies were aware that freedom of association and wage violations were ongoing at PT Panarub Dwikarya before and at the time of the strike. However, your responses - while different - have been wholly inadequate. Mizuno conducted an investigation into the reported violations, but concluded that their supplier committed no violation in dismissing the 1,300 workers concerned. In response to the decision of PT Panarub Dwikarya to ask a waiver delaying the implementation of the 2012 sectoral wage in their Tangerang factory, adidas simply instructed the Panarub group to no longer subcontract their orders to this particular location. However, production of adidas shoes continued at Panarub Industry and Panarub Dwikarya during the time of the wage violations in 2012, and at the exact moment that the leadership of the newly formed trade union SBGTS-GSBI was dismissed in February and March that year. Although adidas assisted with the appointment of a mediator, with the intention of supporting a resolution of the conflict between union and management following the strike, they allowed that process to fail without further intervention or consequence.

Following the failure of both the Indonesian government and your companies to respond adequately to the violations at PT Panarub Dwikarya, the trade union filed a complaint with the ILO Committee on Freedom of Association. The interim report3 compiled by the Committee is very clear about the fact that the company had not paid several months of wages, and that “to strike in order to demand better working conditions constitutes a legitimate trade union activity”. As such the strike could not be declared “illegal” by the employer, and worker dismissals based on participation in the strike can not be justified. The ILO has requested the Indonesian government “to initiate an independent inquiry to address the allegations of anti-union termination of 1,300 workers and to determine the real motives behind these measures”. “Should it be found that they were terminated for legitimate trade union activities”, the ILO urges the government “to take the necessary measures to ensure that the workers are fully compensated, if indeed reinstatement is not possible due to the company’s closure.”

While the ILO mandate is restricted to addressing governments and not addressing businesses, the UN guiding principles on Business and Human Rights4 clearly state that it is the responsibility of internationally operating companies, irrespective of the actions of the state, to ensure that human rights are respected throughout their supply chains. Companies should use, and if needed increase, their leverage over business partners to end human rights violations, mitigate the adverse impacts and contribute to the provision of remedy. Yet both adidas and Mizuno have failed to either end or mitigate the impacts of these violations, and are refusing to contribute to appropriate remedy in their failure to ensure that the ex-PDK workers receive full severance in this case.

Adidas has claimed that it has done all that can be expected from a buying company, because it had stopped its subcontracted orders in PT Panarub Dwikarya by the time the strike took place. Furthermore, adidas had requested Panarub to engage in mediation with the union after the strike had ended, and finally in 2016 asked their supplier to meet with the union to reach a settlement.

On both occasions where Panarub was asked by adidas to engage with the union they refused to negotiate in good faith. On the latter occasion, Panarub refused to bring a serious offer for compensation to the table, thereby aborting the negotiation before it could even properly start. In both cases it is clear that adidas did not use sufficient leverage to make their key supplier understand the absolute need to pay the workers full severance.

Stopping orders at the subcontracted facility, while continuing to do business with the same business group, cannot be considered an acceptable strategy. The business group did not face any consequences of non-compliance with human rights, and through this avenue adidas condones, and therefore can be considered to contribute to the continuation of the rights violations.

Mizuno has concluded that the dismissal of the 1,300 workers was not in violation with Indonesian law, and therefore it states it cannot put pressure on PT Panarub Dwikarya to pay full severance payment. The ILO committee’s recommendations however show that, in this case, the Indonesian law system fell below what is expected under international standards and that workers are indeed entitled to full severance payments.

Meanwhile, the 345 workers are still not made whole for the unjust dismissals, and the financial hardship they have been facing for the last five years since. We therefore call upon both adidas and Mizuno to answer to this call in finding a solution for the workers concerned and to contribute to the remedy needed.

Find a PDF version of the open letter here.