European Parliament should vote for an investigation into Bangladesh labour violations

by christie — last modified 2020-08-10 10:46
Contributors: 13f11af8dd02495ebe4dcf89231e1fc9
Clean Clothes Campaign is today calling on members of the European Parliament to call for a trade investigation into labour rights abuses as part of a resolution on Bangladesh that will be debated this Wednesday. Such an investigation would be carried out by the European Commission in order to assess whether the ongoing and systematic repression of trade union rights in Bangladesh should disqualify it from accessing preferential trading terms with the EU. 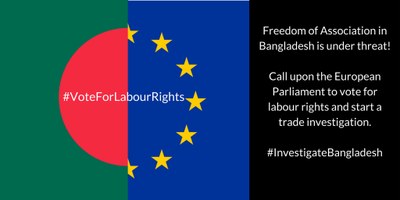 Bangladesh has a long history of trade union repression, but recent months have been characterised by a significant upturn in violent repression. In December 2016, spontaneous wage strikes were met with mass dismissals, raids on trade union offices and the arrest of over 30 labour leaders. While an agreement in February 2017 brought about the end of detentions, labour leaders continue to face charges and thereby a possible prison sentence and workers have still not been reinstated following their unjustified dismissals six months ago.

Moreover, recent examples of violence and even death threats against labour activists in Chittagong demonstrate that the climate for labour advocates’ work remains extremely dangerous. Clean Clothes Campaign is highly concerned in particular about recent physical attacks, threats and criminal charges against leaders and members of the Bangladesh Industrial and Garment Union Federation (BIGUF)

The European Union response to these events has been to slightly increase the strength of its language in communication with the government of Bangladesh, but this has fallen short of any meaningful action. In a letter in March 2017, the European Union urged the government to improve the labour situation before the annual review of the Sustainability Compact between Bangladesh, the European Union and the International Labour Organization (ILO). The Compact binds Bangladesh to significant commitments in the field of labour reform. However, when the review took place on 18 May 2017, Bangladesh' clear lack of progress remained without repercussions, and the government was allowed to stick to the same unfulfilled commitments it had made four years ago.

Despite this failure to comply with clear commitments, the European Union's patience seems inexhaustible, and Bangladesh was given yet another deadline – August 2017 –  by which to honour its commitments. Bangladesh is also expected to formulate a clear plan for labour law reform, which is to be implemented by June 2018. The EU’s letter suggests that continued non-compliance might harm the trade benefits that Bangladesh currently enjoys under the 'Everything but Arms' category.

Clean Clothes Campaign believes that the time for extending deadlines has long since passed. The international community, including the ILO supervisory bodies, has repeatedly stated that the Government of Bangladesh is not willing to guarantee minimum international labour standards. Given the ongoing failure of the government to propose or implement reforms and the increasingly serious violations of freedom of association - including physical violence and death threats - a stronger and more immediate response is needed.

Ben Vanpeperstraete of Clean Clothes Campaign says: 'The government of Bangladesh has had enough time to carry through the necessary labour reform it committed to so many years ago. The December crackdown and the recent violence show that the situation has in no way improved; to the contrary, it has deteriorated. It is vital that the European Union starts a clear investigation into whether the Government of Bangladesh is complying with its obligations under the Everything But Arms trade agreement.'

We made a solid case for a trade investigation in April 2017. Read our argumentation here.