by neva — last modified 2017-05-02 08:29
Two Members of the European Parliament (MEPs) visited Sri Lanka to evaluate respect for labour rights prior to the European Union's decision on granting Sri Lanka the so-called GSP+ preferential trade access. During the visit the government committed to labour rights improvements, such as progress on ongoing cases, allowing trade union access to export processing zones, a revision of the labour law and of the union threshold (currently at 40%), and ensuring that the benefits of the preferential trade status would be shared with the workers. 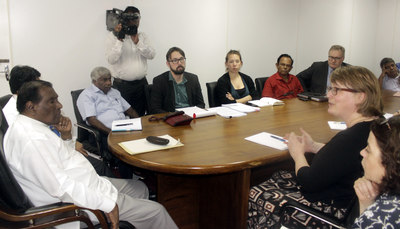 Sri Lanka’s labour rights record came under scrutiny as the European Union is set to decide in May whether the country is duly entitled to preferential trade acces to the EU under the GSP+ regime (Generalised Scheme of Preferences Plus, see the official website for details). With the EU being Sri Lanka's second-largest trading partner, this decision has far-reaching consequences. Lola Sánchez Caldentey commented: "The European Union should not grant a special trade status to Sri Lanka if the money coming from the advantages of this status would remain only in the pockets of a few businessmen. We are willing to give preferences to Sri Lanka, but only if we are sure that the benefit will go to the workers."

Clean Clothes Campaign has been closely following developments in Sri Lanka, as the apparel industry accounts for about half of the country's total exports. A recent example of cases that we have brought to the fore is an attempt to prevent workers’ organizing and trade union representation at two factories in the Katunayake Free Trade Zone (see details).

During the mission, Lola Sánchez Caldentey assessed that, “If the European Union consumers knew the extremely abusive working conditions of the women who produce the clothes they buy from Sri Lanka, they would be ashamed." Anne-Marie Mineur said that, “The government must ensure that these workers can organise themselves through trade unions, because otherwise exploitation will continue."

The MEPs expressed concern over the implementation of legislation that was to address human rights violations. They also pointed to the negative effects of the extensive use of temporary workers agencies on freedom of association and collecting bargaining rights, and highlighted that the judiciary has increasingly been interfering in labour disputes and collective bargaining to the detriment of trade unions. (Read the full statement.)

Sri Lanka has been suspended from GSP+ since 2010 because of its human rights record. Clean Clothes Campaign, IndustriALL Global Union and the International Trade Union Confederation have formulated a joint position on Sri Lanka’s GSP+ status and called upon the EU to seek agreement with Sri Lanka on a roadmap to bring the country into compliance with core labour standards before the reinstatement of trade preferences.