by christie — last modified 2017-03-01 15:49
Former workers of the Faremo International factory in the Philippines reached an agreement about financial compensation in February, after more than three months of continuous picketing. The workers were protesting the closure of their factory that seemed primarily aimed at curtailing the recently established factory union. Bolstered by international solidarity the dismissed workers stuck together and reached a campaign victory. 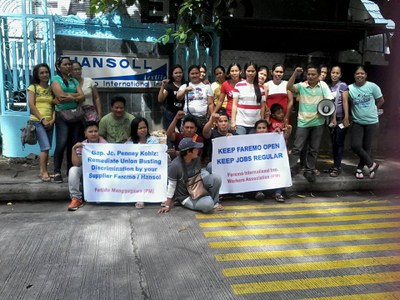 In November last year, the closure of the Faremo International garment factory made over 800 workers jobless. Faremo International factory, located in the Cavite Free Trade Zone in the Philippines, is a subsidiary of the Korean owned Hansoll group. The owners claim the factory had to close due to losses and lack of orders. However, the factory union found indications that orders were transferred to other Hansoll owned factories in Vietnam and Cambodia. International garment brands do not plat Hansoll, which then decides where the production takes place. The union believes that the closure was meant to break the union activity that emerged in the factory more than a year ago. Among other things, it led to the negotiation of a Collective Bargaining Agreement in June 2016. Further evidence for union busting was the fact that lists with the names and photos of union members were passed on to at least two other factories.

Partido Manggagawa (Labour Party) supported the workers in their struggle. The chairperson Rene Magtubo said: “Illegal closure is a weapon of last resort by employers in their union busting bag of tricks. Faremo is not the first and probably not the last.”

When workers noticed that machines were being taken out of the factory in the weeks prior to the closure, they started a picket line to prevent further dismantling of the production. It took over three months of continuous picketing to reach an agreement with the management. This agreement stipulates substantial financial assistance on top of the separation pay, the granting of sewing machines for a project initiated by the fired workers and the possibility of rehiring if the factory were to reopen.

The president of the Faremo labour union Jessel Autida stated: “We owe this victory to our members' determination to fight, and the solidarity of fellow trade unions and international labour rights advocates.”

The workers had received expressions of solidarity from trade unionists and labour activists in Cambodia, Indonesia and Korea, the latter of which directly contacted the Hansoll group. In addition, labour groups in the US and Europe put pressure on the factory's buyers, which included GAP, JC Penney and Kohl’s.

This victory further testifies to the power of international solidarity and supply chain action to fight for workers' rights in the garment supply chain.