by mirjam — last modified 2017-03-13 10:56
Clean Clothes Campaign, IndustriALL Global Union and the International Trade Union Confederation urge the European Union to adopt a roadmap for Sri Lanka with time-bound measures to comply with the ILO core conventions before the country can benefit from GSP+. Sri Lanka is currently in serious breach of those conventions. 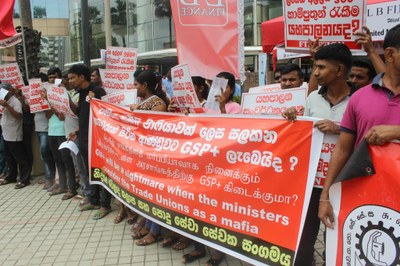 Sri Lanka is among the top apparel-producing countries in the world relative to its population. The apparel industry of Sri Lanka accounts for about half of the country's total exports. Violations include obstruction of the right to freedom of association, gender-based discrimination, sexual harassment and unsafe work places. The majority of garment workers in Sri Lanka are women.

CCC and the Global Unions state that the process for re-admission of Sri Lanka to the list of beneficiary countries under the EU GSP+ must include a review of the law and practice relative to the ILO Core Labour Standards. Factory management continue to violate labour laws and regulations, through intimidation and dismissals. The Sri Lanka government and the Board of Investment, which governs the Free Trade Zones, do little to enforce the law, allowing these violations to continue with impunity.

Telling examples of the wave of union busting practices are the blacklisting in the Katunayake Free Trade Zone, where male and female workers who are suspended or dismissed on the grounds of trade union related activities are blacklisted within the zone, resulting in an effective ban of hiring. Workers at Smart Shirts Ltd. Phase 1, based in the same Free Trade Zone, who formed a union, were systematically suspended and dismissed. The same happened at one of the five factories of Polytex Garment Ltd, where all suspended and dismissed workers were female. Similar practices of union busting are happening at ATG Ceylon (Pvt) and ATG Occupation Ltd, where managers tried to silence workers addressing toxic chemicals and their safety at work. CCC urge the EU to address these concerted efforts by manufacturer associations to work towards "union free" export promotion zones.

Although the GSP preferences were not withdrawn over labour violations, the Clean Clothes Campaign, IndustriALL Global Union and the International Trade Union Confederation believe that serious violations of core labour rights must be addressed before the reinstatement of trade preferences. They call upon the EU to seek agreement with Sri Lanka on a roadmap to bring the country into compliance with core labour standards.